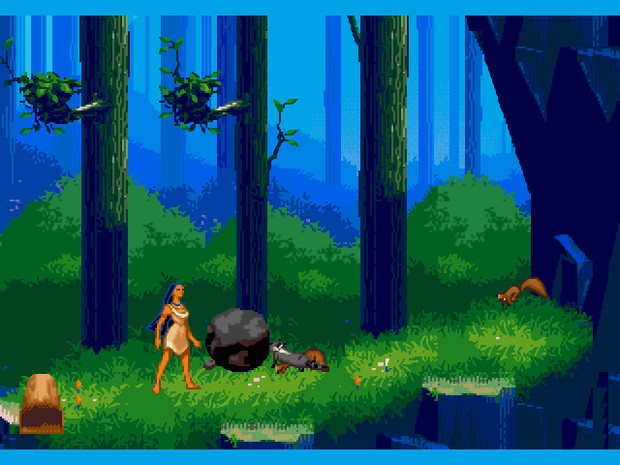 My video game beginnings were humble. I didn't get off to the most "hardcore" start. My foray into the gaming world began not with Duke Nukem 3D or Final Fantasy VI, but with Pocahontas for the Sega Genesis.

When the game came out in 1996, I had something of an obsession with the Native American Disney princess. I'd watch the movie whenever I was being babysat, owned a Pocahontas costume and I even had a little plastic Pocahontas-themed tent. Much to everyone's dismay, I recall I'd even beat on little drums to what my untrained ears perceived as "the tune of the song" while the movie was playing. Maybe my parents figured I'd be less inclined to drum on things and run around the house like a Powhatan if I had my hands full with a Sega Genesis controller. In any case, at some point the game came into my possession.

I was enthralled. As with most of the games I played from childhood well into adolescence, I'd sit in front of that glowing rectangle with a funny look on my face and repeatedly make Pocahontas slam into things in a futile effort to progress the storyline. With a little help from my dad, though, I'd always manage to solve the puzzle, acquire the next animal spirit power and move on.

...that is, until I got to the part where Pocahontas has to sneak past a couple of colonist guards in order to get into their camp and see John Smith. If you fail, Pocahontas gets shot, and that just did not sit well with me. Sneak past the guards and risk an innocent 16-bit character's life? I froze up and had some sort of five-year-old existential crisis over the whole ordeal. It took me a long time to beat the game, but when I finally did and a text-box popped up over the final scene to congratulate me for preventing the war, I felt a genuine sense of accomplishment. I may have even shed a tiny, manly tear... or y'know, bawled like the baby I legitimately was.

Remembering all of that, this week I decided to go back and replay Pocahontas for the Sega Genesis. I've found it's often best to leave fond memories of older video games alone, as things that were awesome when I was five generally aren't awesome anymore. In this case, I was a little pleasantly surprised. Pocahontas is still a beautiful game with the sort of flowing animations you'd expect from Disney. It's very short and the plot clearly isn't the main focus, but I still had a lot of fun completing levels and finding secret items (even if I'm not sure exactly what they do). Often overlooked by kids who remember playing The Lion King and Aladdin, Pocahontas was pretty great. Sometimes five-year-old me is right about things.

Destructoid, what was your first gaming experience? Do you still consider it a good game? What sort of games do you play now? I like to play more open-world RPGs and shooters than Disney adventure games these days, but once in awhile I like to go back to my roots. Duke Nukem might be good at smacking bitches up, but can he paint with all the colors of the wind?
#Community    #Retro
Login to vote this up!