To start, I'd like to address a problem I've been having regarding higher res 3D indie games. I haven't been able to play them. Apparently, my laptop is not a particularly great gaming platform, so several games such as Octodad, Devil's Tuning Fork, Which, Q.U.B.E., etc. haven't been able to run properly or have been super laggy. This is a real shame as many of these games look extremely interesting to me. Especially Octodad, from which a screen shot is currently being used as my desktop background... maybe I'll have to hijack my friend's computer for a few days. Until then, however, I unfortunately won't be mentioning too many (if any) high resolution indie games. But if you're a huge fan of retro graphics like I am then you're in luck! 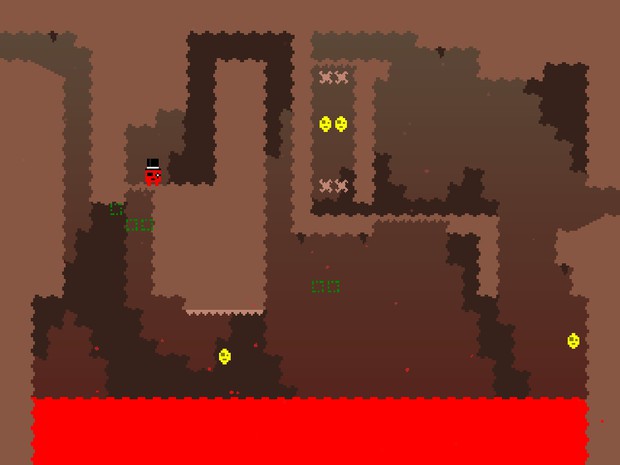 Jumper Three is my favorite of Matt Thorson's Jumper games. You play as Ogmo, the hero of the Jumper series, in his quest to find a home on a strange planet. It's a rather difficult platformer that requires you to traverse levels filled with pits, spikes, blades, lava and many other obstacles. Throughout the game, Ogmo will split into five different forms, each a different color and each with special abilities including the ability to hover, grapple, create platforms or perform a super jump. You must alternate between these forms in order to beat each level and collect all of the coins. There are no lives, so if you die you can just pick a new character and quickly start over again. Coins can be used to skip any levels that you find to be too difficult, or you can use them to buy hats instead, which don't really do anything other than make Ogmo impossibly adorable. The top hat and monocle, pictured above, is my personal favorite accessory. The game features very cute, retro graphics, which I found much more sleek and appealing in this game than in Thorson's previous Jumper games (probably because he got rid of those ugly outlines). The game also contains 50 levels, as well as 10 extra unlockable levels, which provide for hours of fun and replayability.

And that concludes my third batch of excellent freeware indie games. I hope you guys are enjoying these games so far, and be sure to donate to the developers if you want to be awesome!
#Community    #Indie
Login to vote this up!