7:38 PM on 03.31.2011 (server time)    0
There is proof that God loves bullet hell games, and that proof is the existence of Infinity Danger, a game inspired by an independent, 2003 Japanese release called Warning Forever. A lot of what I'm going to say about this game is highly dependent on a working knowledge of Warning Forever, so it might be for the best if you go ahead and download and install that.

Honestly, it's worth a try. The game is free, and it was made in 2003 so even the crumbiest working PC today should be able to run it. My own PC at the moment is a bloody Dell Desktop with a measly 512 RAM and no vid card, and WF runs perfectly on it.

Downloaded the game yet? If not, too bad. I'll try to keep it objective, but I'm dealing with a game based on one of the most innovative shooters in the last decade, so you'll understand if I'm a touch opaque here.

Before I begin the review, allow me to present, without comment, a trailer for the game:

The basic premise of Infinity Danger is actually pretty simple: It's a twin-stick shooter where your left thumbstick controls the ship and the right thumbstick controls the cone of machinegun fire you will be directing towards your enemy. This is a vast improvement on Warning Forever's own control scheme, which was "fight with the visual cone to do what you want and then dodge enemy gunfire while vainly trying to reposition your shots to hit the enemy".

Now, you're given a set time to beat the first boss. Each time you defeat an enemy, more time is added to the clock. Every time you die, you lose time. When time runs out, the game is over and you lose. What makes it interesting is that Infinity Danger tracks which parts of the last boss gave you trouble, what weaknesses you exploited, and like Warning Forever, it covers up those weaknesses with the things which gave you trouble.

Lasers keep killing you? Have more lasers. Learn to dodge them or get thee hence, motherfucker! 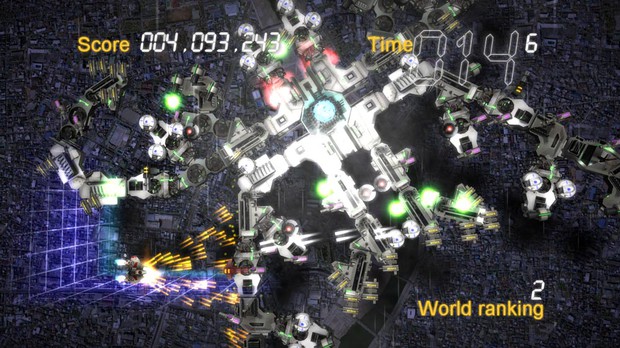 You're going to need moar gun

And ultimately, the game is about strategy. A singular strategy, which is actually well ingrained in any bullet hell fan: Take risks. You can't afford to spread your shots wide, you need to focus on that one joint which will allow you to destroy the next joint, so that you can focus your shots on the core while dodging the dozens of lasers and missiles skimming by your ship.

And it's all the more lovely for that. Playing it safe is literally a bad thing in this game. Even in the beginning stages, when there's not much on the screen, you should be taking more risks so that you have the extra five or ten seconds you'll need twenty stages later while dealing with an infinitely more complex and damnably hard boss.

Infinity Danger doesn't really innovate on the Warning Forever formula. Twin-stick controls and prettier graphics aside, this is practically the same game. That doesn't make it bad, however. It makes it a great step in the right direction.

Could it use more game modes? Perhaps.

Could it have done more than add pretty graphics and improved graphics? Most certainly.

Is it still worth the price of admission? I'd pay $5 just for the ability to play this game co-op, as it stands right now. I know it gets said a lot, but for a dollar you really cannot go wrong, here. Go buy Infinity Danger.

Now!
#Community    #reviews
Login to vote this up!