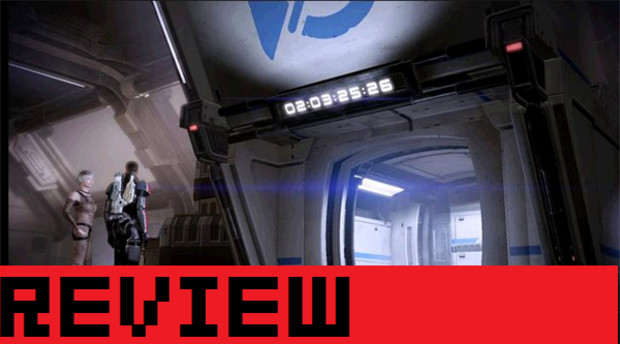 Being the Bioware whore that I am, I bought and finished the latest DLC for my current favorite game, Mass Effect 2, within the first few hours of its release. This is my review of Arrival ME2’s latest and last expansion, and the “bridge content” between ME2 and 3. This will contain minor spoilers for the ending of the Mass Effect 2 campaign, so if you haven’t played that yet, and you intend to, proceed with caution.

I decided I wanted to write this about halfway through playing the DLC; my initial purpose being to formally describe how underwhelming Arrival was. Between then and now, my opinion has shifted a bit further towards the negative end of the spectrum, and it is definitely a weak link in the exemplary line of DLC Bioware has provided thus far.

Arrival is short. Easily shorter than Overlord or Lair of the Shadow Broker. I finished it the first time through in just under an hour between two of my classes. There aren’t any new enemies or weapons that I discovered, so the only reason to play is the plot; which is where a majority of my complaints originate.

Bioware, and the Mass Effect franchise especially, are big pushers of player choice. It struck me as odd then, that none of your choices matter in the DLC. There are at least two major (or at least they should be) options in Arrival, and after playing through twice I can confirm that neither has any effect on the outcome at all. What is worse is that the writers dance around one potentially brilliant choice that could have had tremendous effects in Mass Effect 3, and they fail utterly to capitalize on it; a real shame, considering that I was expecting to have to make that decision and I spent most of the time wondering which course I would ultimately take. It is rare for games to make me genuinely question myself, and battle with which action is morally “right”, that I was saddened when I realized that all that speculation was meaningless. I can’t say anymore without spoiling what little is there, suffice it to say that I feel a great opportunity was squandered.

Arrival can be purchased for 560 Microsoft/Bioware points or $6.99 on PSN, and at that price I would say it isn’t worth the cost. Arrival was billed as “bridge content” but by the end everything returns to normal. No critical information is revealed so it largely feels like a waste of time. If you haven’t played Lair of the Shadow Broker yet, I highly recommend it and it is definitely worth the $10 pricetag.

P.S.
For some reason one character or another says “Arrival” at least five times, probably more over the course of that hour. It seems intentional, which to me, makes it that much worse because there was a really tense moment when I just could not stop laughing.

P.P.S.
I was really hoping to knock this review out before Destructoid got their review up, but it looks like I was beaten to the punch.
#Community    #reviews
Login to vote this up!