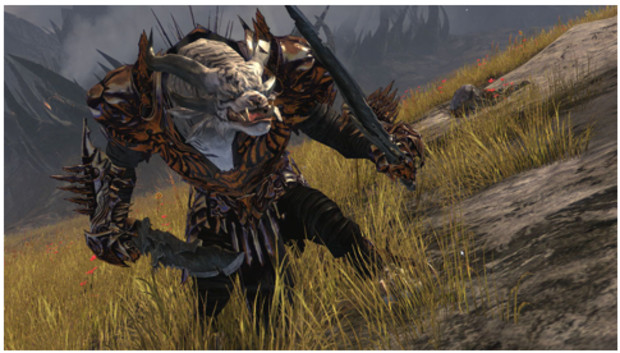 Guild Wars 2 was showcased at the Alienware booth at PAX for the ultimate PC gaming experience; let me tell you, it wasn�t the computer that made me fall in love with the game. Guild Wars 2 is the MMO I, and many, many others, have been waiting for and more. It combines single-player RPG elements, like personal character story, with basic MMO elements, like an open persistent world, and puts them in a beautifully crafted new Tyria for millions of players to enjoy.

The Guild Wars 2 demo began with a similar character creation screen to the one at PAX Prime last year: the player chooses male or female, then is asked a series of questions that creates their overall personality; this personality contributes to how NPCs will react to the player character. At PAX East, the Norn was now playable, and two new classes, the Guardian and Thief, were available also. I played the thief, a class similar to rogues that I thought was going to be a lot of �backstab this� and �smokescreen that.� I was pleasantly surprised to find out the thief in Guild Wars 2 plays just like the rogue in Dragon Age 2. I dodged, did backflips, sliced enemies with my twin blades, all with the fluidity of a forty-hour RPG and none of the sit-and-wait grind of a traditional MMO. I actually felt like I was doing something, rather than just pressing keys in the same combination over and over and over and o�you get the idea.

Another huge diversion from the traditional MMO in Guild Wars 2 is the dynamic event system. ArenaNet has been hyping up this aspect of the game for months and months, and the hype, so far, is definitely lived up to. At the GW2 panel, many players expressed concern that the dynamic events system would get old, would just reset the event after all the players had left the area, and wouldn�t provide the experience the GW2 team has been trying to create. All these fears were assuaged by Colin Johanson, lead content designer of GW2, who described the dynamic events as �cycling.� He went on to say the events will only be affected by the players, so, in the example used by the team over the course of the panel, if a village is being attacked by centaurs and players save it, it will stay saved until those centaurs come back; if no players save the village the second time, it will be destroyed, and the centaurs will take over, slowly building defenses and making it harder to take back the town. The village will stay this way until players assault it and take it back from the centaurs. In the meantime, any NPCs that once lived in the village will be unavailable until the players restore the town to its original, peaceful state. Players could even go to the centaur camp and destroy it, making it harder for the centaurs to attack that specific town again. The events are truly dynamic and player-controlled, but I still had my reservations about certain aspects of the game.

The concepts of exploration and creating your own story were pushed pretty heavily at PAX, but there was no discussion of the overlying story that would drive player characters in the world. I�m worried there won�t be any motivation for me to play with other players if we have no common ties, like an overarching storyline. Why would I care about saving the world from dragons if there�s no motivation for me to do so? While the personal character story is a new and interesting aspect of MMO play, what if I want to play a character that is horribly selfish and hates people? What will make me help other characters when I could be off killing monsters on my own and looting their corpses all on my own? I suppose nothing is stopping me from doing that, but what I loved about the first Guild Wars was its story and the NPCs that brought all the players together. I don�t want that to be sacrificed in favor of a completely open, unmotivated dynamic world.

My reservations aside, Guild Wars 2 is shaping up to be the most revolutionary MMO of the decade. I�ll be keeping watch on the GW2 blog for the latest news. Also, there�s still no release date, so sit tight, Guild Wars fans. It�ll be a while before you can get your hands on this magnificent specimen of an MMO.
#Community    #Industryevents
Login to vote this up!