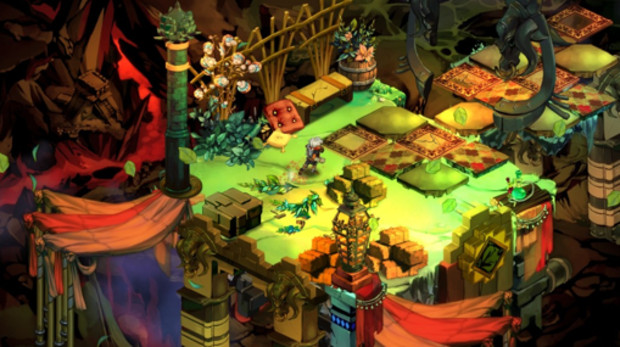 The demo of Bastion at PAX East brought back warm memories of sitting in front of a non-HD TV, eating Teddy Grahams, and playing A Link to the Past on the Super Nintendo. Bastion feels like it should have been part of my childhood, except that it has exceptionally smooth voice-acting, beautiful HD graphics, and doesn’t come on a 16-bit cartridge. Instead, while Bastion will still feel like a revamped, amazing Super Nintendo game, it will be available on XBLA and PC this summer.

Not only did I have the pleasure of playing Bastion, I also had the awesome opportunity to speak with Darren Korb, the audio and music designer, who filled me in on the basics of SuperGiant Games’ first game.

Bastion is an action RPG. The main character, The Kid, wakes up on a rock floating in the sky and proceeds to find his way to the Bastion, a place where everybody agreed to go if there was a disaster. We learn the world has been destroyed by the Calamity, and as the The Kid walks forward, the remnants of bricks and pathways fall into place at his feet. It really looks stunning and adds a sense of mystery and uneasiness to this shattered world. I found myself cautiously sneaking closer to edges to see if a pathway would spring into existence for me, and seeing if perhaps I could discover some hidden treasure.

As for the RPG element of the game, I was expecting character dialogue and reading text boxes of information. However, Bastion remodels the way a narrative is told with the use of a narrator. Everything from telling the story to aiding the player with hints and tutorials is conveyed via the narrator. The narrator isn’t just a stale voiceover either. The rich, Noir-like voice reacts to what the player does (i.e. what path is taken, what items are picked up, dying at a certain point, etc.) and responds accordingly. Darren informed me they have spent over a year recording lines; redoing lines, changing lines, and adding lines–an evident demonstration that the narrator is significantly vital to the game.

As for the combat, there are plenty of different weapons to try out and the game never discourages you from using one particular weapon to defeat one particular enemy. Of course, certain weapons might be optimal against certain enemies, but the game will never punish a player for their weapon choices. “The combat is between Zelda and Diablo,” Darren explained. “We designed the game so that no matter what weapon the player picks, they can [play] through the game. We wanted to reward experimentation.” Although I spent a majority of the demo running away from enemies and using a bow, there was also the option to use a giant hammer and dodge attacks.

One of the principle aspects of the game is rebuilding the world. Although the player isn’t constructing an open world, they will be choosing where and what buildings to place in the remade villages. The remade world isn’t just for decoration either, as the player will be able to enter and make use of the buildings. One such building is the distillery, which I came across in the demo. Inside, I had the option of picking different potions that increased particular stats.

The music, as Darren described, “has a fantasy frontier vibe” and the art looks as if it could be a vibrant, fantastically unusual Saturday morning cartoon. It was an honor to see an upcoming downloadable game that took inspiration from early RPGs. It was a stark contrast to all the intense FPSes on display at PAX East, and quite a distinguishable game from the all realistically raw games of today’s market. I look forward to being able to play Bastion when it becomes available this summer.

For more information, check out SuperGiant Games’s website.
#Community    #Industryevents
Login to vote this up!