I would like to start off with a bit of information about how I choose which games to feature. First of all, I'm trying to focus specifically on freeware indie games which are downloadable rather than playable in a browser. Some games (such as Tower of Heaven, which I talked about last week) give you both options, but I'll be discussing the downloadable versions. My reason for this is probably just preference, but it feels different for me to play a game on my desktop as opposed to playing one in a browser. In the future, I may make a blog focusing specifically on browser games, but for now I'm sticking with downloadable titles. I also try to only pick games which I have beaten. Of course, not all games have a proper ending, so for games like this, such as shoot 'em ups that register high scores, I try to play the game extensively before writing about them. Lastly, I'd like to provide you with as varied a list of games as possible, so I'll try to incorporate many different genres, games of varied lengths, and games of varied popularity (ones that most people have probably already heard of as well as some that many people might have never heard of). Hopefully this will appeal to people who are new to these types of games as well as people who play them regularly. 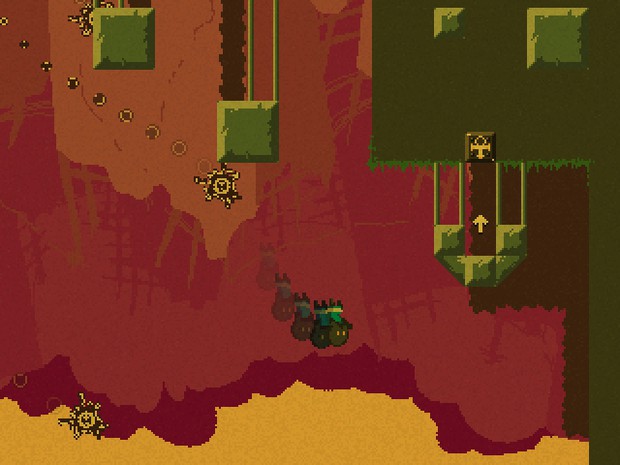 I might go ahead and put up a SPOILER WARNING here. I'm not sure if discussing the game's core mechanic is a spoiler or not, but it would be kind of hard to tell you about this game without discussing it. Verge is a short puzzle-platformer that revolves around an interesting mechanic involving life and death. You will find while playing this game that dying does not mean the end of the game. In fact, dying is sometimes necessary to solve certain puzzles. You must move between the upper world of life and the lower, reversed world of death to solve puzzles and reach the end of the level. However, while exploring the death world you will come across creatures that will drain your soul, which will mean game over unless you can shake them off or return to the life world in time. The game contains only 9 levels, so it shouldn't take you too long to beat. It features smooth, 2D graphics and a peaceful soundtrack. One kind of annoying thing I noticed while playing was that the game would slow down quite a bit whenever enemies would shoot fireballs at you, but this may just have been a problem with my computer.

That's it for this week. I hope you enjoyed these selections!
#Community    #Indie
Login to vote this up!