Returning to the Bunny Planet - an escape from gaming

2:00 PM on 03.21.2011 (server time)    0
When I was a little kid, my parents gave me a little cardboard sleeve that had three tiny, indelibly cute books in it, with the set being called "Voyage to the Bunny Planet". Maybe some of you remember it. Well, as a kid, when I was going through down periods I would flip the books open and enter a world, like the bunnies depicted in the books, where I could forget about my troubles and refocus on what was important in life. 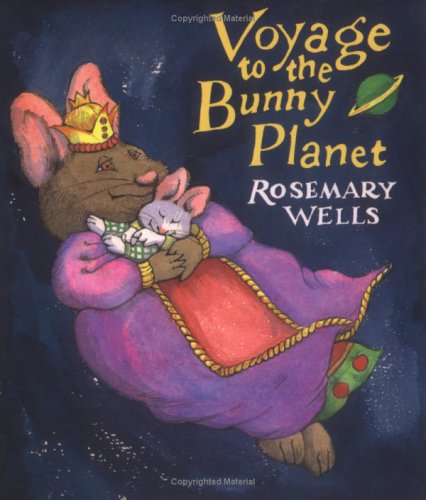 It's this freaking relaxing.

For a while, gaming was akin to that escape for me. I didn't get FF7 until I was in middle school in like 2001 or so, but I remember hanging out at my buddies house in like 1998 just watching him play that game and it was an utterly engrossing experience for me. When I played games like Twisted Metal and Crash Bandicoot, it was the same experience as well. A momentary break from the real world that made you feel a little more fresh. Maybe it's because I was really young and life was less confusing back then, but a lot of those experiences have changed over the years. I'm 23 now and finishing up undergrad at a competitive, top-tier school that is just stressful sometimes. It seems, sometimes at least, that I've forgotten how to relax. I'll play games like Borderlands or Dragon Age or Oblivion for hours on end and maybe for the first hour they are relaxing, the rest of the time, however, just seems like a major grind. There's this book called "Reality Is Broken: Why Games Make Us Better and How They Can Change the World" (gigantor title huh?) written by a Jane McGonigal that posits, based on studies, that playing videogames for 23 hours a week is good for you but playing anything more than that is bad. I haven't read the book, but it seems that I can't play certain games for extended periods of time anymore and still enjoy them. Final Fantasy XIII was just kinda mediocre as was Dragon Age II and Mass Effect 2 (GASP!). As enjoyable as Bioshock was, by the end of the game I just fucking wanted it to be over already (Mind you I played it nonstop for like 18 hours till I beat it). 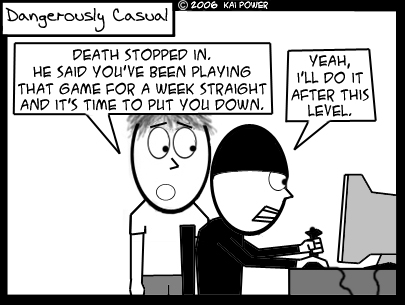 Sometimes I don't know when to stop

Of course the games I listed all have great aspects to them, so before the pitchforks come out, let me say that I've had some great experiences as a gamer in my life and am not knocking gaming at all. From Smash Bros. to MGS2/3 to FF7-10 and many, many games in-between. I'm not sure this post is a "Why aren't games fun anymore?" kind of thing, but I increasingly think that sometimes I just need to escape from games back into a world that I originally escaped from. Perhaps it's because games are REALLY addicting. More and more studies are showing that games, when played too much, cause depression, anxiety and general loss of interest in everyday things. It's shitty, then, that something so fun can impact me so much. Of course I don't blame gaming, how could I? I blame myself for not knowing when to say no and not managing my time more effectively. How many of you experience this? Have you had to set aside time to game and then limit yourself doing it? Moderation in all things, as they say, is best, but how do you get back into life after you've spent so much of it gaming? In the past, I would drop 10 hours into games in a day, easy, and then just feel like shit later on (FUCK YOU WoW!), but, now that I'm getting older, I'm getting more and more concerned that my life is actually being wasted. Seriously, it's hard for me to say that gaming sometimes is a waste of life, but, in my case, when you play that much for that long, important, happy moments pass you by and sometimes you forget what it's like to live life normally. 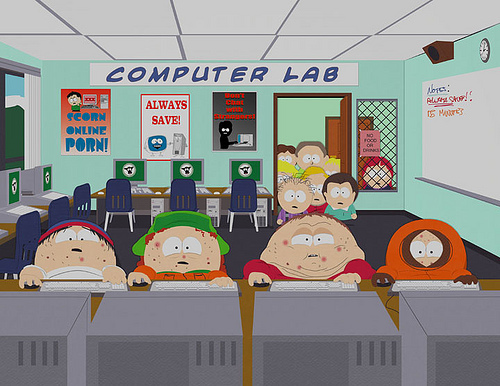 "What do you say, guys? You can jus... you can just hang outside in the sun all day tossing a ball around. Or you can sit at your computer and do something that matters..."-Cartman

Maybe I've spent too much time escaping important things in my life that now relaxation doesn't come as easily as it once did, maybe that's just what getting older is like. Too much shit to do, not enough time to do it all, but, sometimes, I think we all just want to escape to our own proverbial bunny planets where life makes some semblance of sense even for just a bit. Blink 182 was right, nobody likes you when you're 23:P
#Community
Login to vote this up!