10:06 AM on 03.16.2011 (server time)    0
Its been five years for Neiro and Destructoid, the staff has grown and gone through changes, and so has the community. In the past five years we have seen people come and go, we have formed friendships, bonds, and for some even found love (I'm looking at you Stella and Mikey). Each of us has our own personal story to tell when it comes to how Destructoid, and its community, has changed our lives. Here is mine.

I had been lurking Destructoid for about a year before I met Bob "Necros" Muir during my second year of college. He encouraged me to write up CBlogs, chat in IRC, and get on the forums. I was reluctant at first, because of school work, and my self deprecation "Who the fuck wants to read what I have to say?" I thought to my self, "My opinions wont matter" etc. But I got the courage to do so and wrote a few cblogs and started chatting on irc. At the time I was known as RHWeeeeee6 on DTOID, a relative unknown, avid FailCast listener, and still kind of a lurkrer, though id did get a shout out during Bob's 3rd year anniversary video. Around that time I became tired of my handle and decided that I needed a fresh start on the internet, JohnnyViral was born. My new handle, my new name, my new identity of sorts. I hadnt changed, but something about the new handle felt right, felt like it would stay with me for a long time. I re-introduced myself to DTOID during the 10 things you dont know about me cblog deal. After this I got into the forums a bit, got in to IRC and started a bit of a cblog series where I recapped the latest episode of Red vs Blue.

A month or so after this I started my first Dungeons and Dragons game with Analoge, Ryu89, Crocbox, King3vbo and Cataract. We started it from a chat we had on irc and we each thought it was a cool idea so we did it. After a bunch of games Croc came up with the idea to record a podcast, because to us our weekly banter during our DnD games was funny enough to share with the rest of you. 321GoCast was born, knowing fully that we were basically a FailCast spinoff by naming ourselves something that Hito would always say to speed up the recording when things started to take too long.We decided that we didnt need a format, that we would basically not feature anything about the community and not actively seek guests (that aspect fell apart pretty quickly). The podcast about nothing became a reality and to this day is still running with 38 released episodes, a charity event and official pins given out at PAX East 2010. 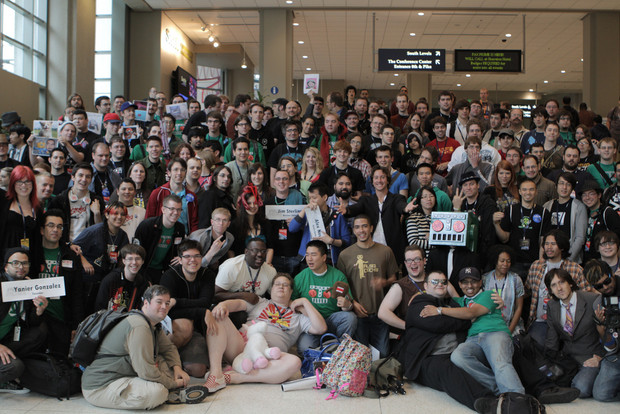 See all these fuckers up there. I love every single one of them.
#Community    #NOTvideogamesrelated
Login to vote this up!