4:57 PM on 03.15.2011 (server time)    0
I thought I'd start my first blog with something somewhat personal and game related. My love for a certain gaming system known by far too few people but slowly growing in popularity due to its games popularity. A system which defined an era of gaming with such gems that would later become huge successes on other platforms. A system that should have had just as much a chance as all the other systems manufacturers to evolve and create current generation iterations of itself (ie PS1, PS3, NES, Wii, etc). 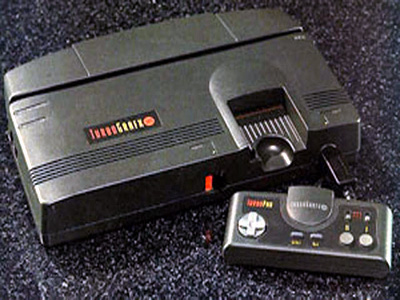 I'm talking about the true underdog of game systems: TurboGrafx-16 Entertainment SuperSystem; known in Japan(where it originated) as the PC Engine.

This system put out classic titles: R-Type, Prince of Persia, Splatterhouse, Bomberman, Raiden, Turrican, Castlevania: Rondo of Blood, Ys IV: The Dawn of Ys, and Snatcher among many others. Classic games that even carried on past the Tg-16. Some of which were only popular in Japan, unless you were well-off enough to afford the CD attachment(TurboCD) to the system and/or lived in a major city (more on these issue later.) Personal favorites aside, these were hallmark games to be sure. So to say the Tg-16 was "the poor mans Sega" was a gross understatement(heard it before). Many of it's games were strong and well thought out, both in narrative and gameplay. Of course, it had its fair share of copy cat games to capitalize on other gaming successes, such as the game Neutopia (equivalent to Zelda in many respects.) Which tops my list of favorite games despite that. Games like Double Dungeons, Bonks Adventure, and Military Madness made it a varied experience for all types of people too. I could go on and on about the games. That's how amazed I was by the system. Thankfully, thanks to its very mild success, games from the system are now even being digitally distributed to various systems; PSN bringing it to the states and Wii already has many of the titles listed above. Old school, your name is TurboGrafx-16 is what I say. To this day, I still love that the games themselves, which could be transported easier than any other game due to its unique design. I personally carried 20 at one time them like credit cards in my wallet. Making the first color portable game system(almost exactly like the Game Gear, but with the games from the home system fitting it perfectly and optional tv tuner).

Some may argue it's a knock-off of the NES/SNES/Genesis. In many ways it was, but where it lacked in the original intent department for a console, it more than made up for it in original titles and ports of arcade games it received.

I realize this system wasn't the best, nor was it really innovative or impressive compared to some others. However, in my humble opinion, it did a lot to bring gaming to where it is now and is the reason I'm a gamer to this day. Hudson being the main reason for this.

At the time of its release, they were hampered with restrictions imposed by Nintendo. If developers wanted to make games for NES, they had to choose to stay exclusive to them or Nintendo would state "shortages" with their cartridges, denying that developer the ability to put the game on their cart/system. Essentially making it NES or bust.

Sounds pretty evil huh? It was due to this fact that developers chose the NES and thus started the chain of the eventual decline of the Tg-16. No Tg-16 games, meant no Tg-16 sales, no Tg-16 sales meant the system was unpopular, and developers wouldn't back the system unless sales were strong for it. A serious case of catch-22 for the Tg-16.

Though, eventually, Tg-16 shot itself in the foot by doing quite a few things wrong here in the states. First was its advertising, which was concentrated in major cities only, making it hard to come by. Then, games that proved to be popular in Japan, never saw the light of day here(only with emulation and mod chips/adapters allowing foreign games to be run). Finally, expensive equipment made it a hard buy for most. I barely got by with a used model of the aforementioned TurboExpress and didn't buy the TurboDuo or the TurboCD until much later to be able to play Prince of Persia.

In the end, what we came away with were only a few solid games for the majority, and a failed console to the minority. I truly still mourn the loss of a worthy console opponent for the current generation of systems, though not for the system itself, but the ideas behind it. I don't believe in the system wars, and no amount of persuasion will prove otherwise. What matters most is the games and what they can do for people.

I'm no one in particular; just another gamer on a site for gaming. Armed with opinions, a love for gaming, anime, and just about everything entertainment related. I've some keen knowledge, insight, and random facts about gaming and it's culture. I'm definitely the kind of gamer to help out my fellow gamer but I can get pretty obnoxious to people who are ignorant or flat out wrong. We live in a world where images and information are at the press of a button, so there's no reason to be an idiot online.