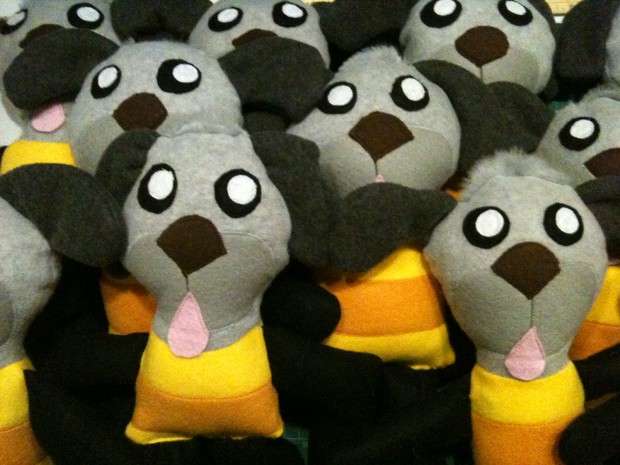 Then the earthquake in Japan happened, followed by the Tsunami's and as reports of the damage escalated I knew I had to do something. Luckily I had a fleet of Beedogs all ready to go and almost all of them already spoken for, meaning I was pretty much guaranteed some money coming in.

I talked to my husband, who'd been following the news as well and we decided we'd donate $5 from every Beedog sold to Global Giving to help with their earthquake/tsunami relief fund.

When I mentioned this on the forum, just to let those who'd already placed orders know they would be doing something good, Topher stepped in and announced that he wanted his entire share of the profits included in the donation. This is amazing as it put our total donation for each Beedog sold to $12 which will really add up.

Since it's for a good cause I figured if more people wanted to buy a Beedog than the original dozen orders I'd taken then clearly I should step up and make some more. So I'm here today to tell you guys about them and how you can help a worthy cause just by buying a stuffed animal of your favorite purveyor of fine journalism.

I should note, that if you don't really want a Beedog, but still want to help out, then by all means just donate to any of the great charities (Global Giving) collecting money to aid relief efforts. As I mentioned earlier I choose the Beedogs because they were practically already sold, and while I'd love to sell more I'd rather they go to people who would have bought one anyway so that I'm not just profiting off of the disaster in Japan.

If you'd like to purchase a Beedog you can find them at Story Builder Toys for a limited time (basically until I run out and quit making more). This is a great opportunity to create good from geekery, will you put on your journalism mustache and answer the call?
#Community    #NOTvideogamesrelated
Login to vote this up!