Limbo: If You Don't Like Me, Then Go Play Halo.

6:21 PM on 03.11.2011 (server time)    0
I finally got around playing the great artistic indie title called, Limbo. The game Jim Sterling gave a 10 to. A game by Destructoid’s own definition is a “Flawless Victory”; a game people point the finger at to prove that video games are an art form; a game that’s been in development for 5 years; a game that’s painted in a lovely, yet uninspiring black and white silhouette art style. In short, Limbo is one of the most disappointing, and pretentiously lazy “art” game I ever played. 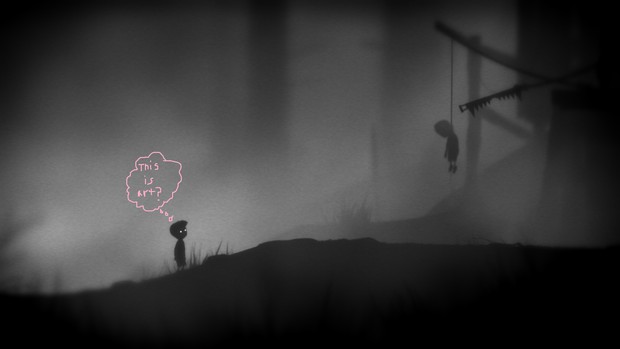 To start this off, I have to say that I’m a big fan of minimalism and ambiguity, but there is a limit to it. When ambiguity is used correctly it can tell its audience to play along with the story. The artist gives you some of the puzzle pieces and it’s up to you to put them together. To tell a story you need something present. Dialogue and characters are not needed, but you need some piece of information to put the puzzle pieces together, or at least enough to interpret whatever the artist is trying to tell you. Limbo doesn't know what story it's telling, nor does it seem to care. Ambiguity can reveal information that can be understood or interpreted in more than one way and is completely different from vagueness. Too bad Limbo is the definition of vagueness. Limbo is like the kid trying to look smart. The kid uses big fancy words with a posh voice, but has no idea how to put them together. Unfortunately, most people are afraid to stick up to the kid, because if they do, then they will be looked at as stupid, or not “getting it”. The main argument I hear from the defenders of this game is that it’s all about the atmosphere, but atmosphere can only get you so far; I got bored after an hour of this “atmosphere”. I’m also a big believer that games have to be fun to be enjoyed. I know people like Anthony Burch disagree with me here, but why can’t we have an artistic title that’s also fun to play. For instance, Flower, with its simple motion controls achieves this, but why is Flower, the only example I can think of? Art games like: The Path, Edmond, Flow, and many others seem to lack the fun factor that are key in a video games. My question: how can anyone enjoy such a boring game? But then again, everything is subjective.

Oh yeah, if you don't like Limbo, then go play Call of Duty.
#Community
Login to vote this up!