4:56 PM on 03.07.2011 (server time)    0
Amongst the waves of skater/gangster hybrid freaks that stalk the asphalt plains of the Bear Flag Republic state university system, our hero, HandsomeBeast, trudged along under the weight of a thousand books and a million pieces of loose leaf paper. He and thousands of others had somehow been tricked into trading their green linen currency in return for indentured servitude and subjugation to harsh judgement. Our hero had been seeking the magic scroll, Batch O�Lore�s De Grie, which is said to improve one�s wealth tenfold.

Sadly, after 6 months, he seemed to have only reached the 1/8th mark of the path on the map which the village elder�s had passed on to him. His back muscles contracted, his eyes were shot with blood, and his synapses fried as he wrote thousands of seals and decrypted hundreds of archives. It didn�t help that he had to drown out the clamor of dozens of vagrants and vagabonds with gallons of shoegaze and wutang.

Then, one day, a message arrived in his lightning-powered stone�

�Have you played �The World Ends With You�?�
-knutaf

This �knutaf� was one of his correspondents from the information trading post De Structoid, an excellent source of information regarding lightning-powered devices used in recreation. knutaf offered to send a cartridge of metal and lightning for our hero to play. Needless to say, HandsomeBeast became very excited for he couldn�t find this particular cartridge near his abode. This knutaf misjudged his own strength, however, for when he threw the cartridge from his kingdom in the Sea of Attle, he applied enough velocity for it to orbit the earth for days before it reached HandsomeBeast�s cottage in the holy lands of Saint Bernard. All was forgiven, though, as it arrived unscathed by the blistering speed at which it was thrown days later. 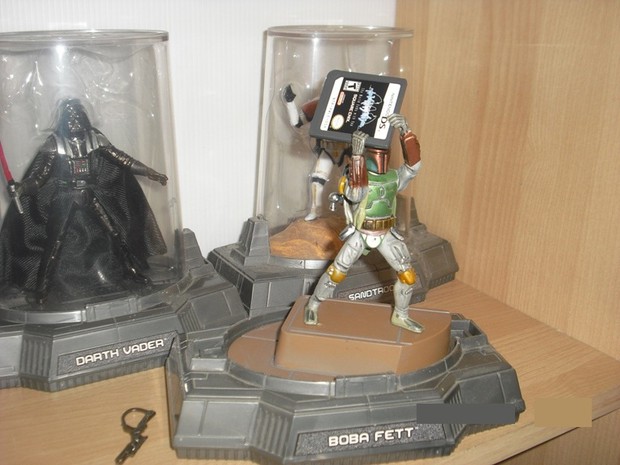 I�ve put about an hour into the game already, and it�s pretty darn good! Boba Fett agrees with this sentiment whole heartedly.

Thanks a bunch knutaf! I can�t type out the happiness I feel when I know that a friend thousands of miles away sent me a game out of the kindness of his heart! (I want to send you a game now, but all I have are Wii and DS games that you might not take an interest in� We should talk about that! ;))
#AboutDestructoid    #Community
Login to vote this up!