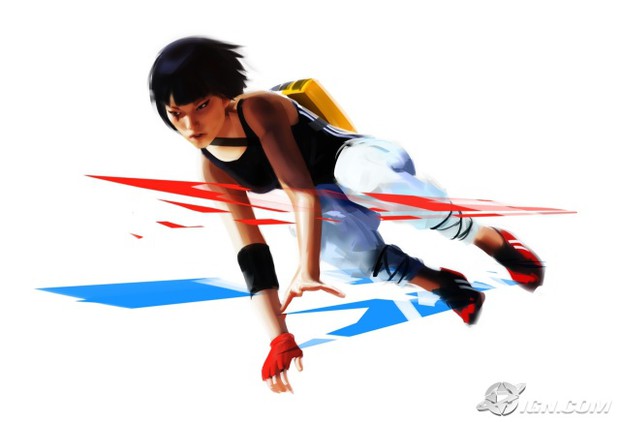 I often wonder why developers don't push for sequels on games with potential like Mirror's Edge. And really, the fact that EA is trying to figure it out without much apparent success should surprise me, but it doesn't.

That said, there's a few features which immediate sprung to my own mind when I read this.

The thing with the courses in Mirror's Edge was that they were bite-sized pieces of levels and they didn't really do anything new. Instead of "do this level segment", it was "do this level segment within X seconds", which is just not good enough. I don't care how simple the actual geometry of the levels is (the Metal Gear Solid series aptly demonstrated that glowing lines and obvious polygons are all you need if the gameplay is there), but give me some freaking variety with this.

Mirror's Edge is a game about running, so obviously simple death match games are out. However, that's not to say that the game's core design doesn't offer a lot of variation in potential multiplayer.

Offhand, I'm thinking that a Follow The Leader gametype would be awesome. One player starts as the Leader, and gets a five second headstart, leaving a small ring every second. Each subsequent player has to follow in the Leader's footsteps and they can't fall too far behind... But a timer keeps running down. The winner of the game is the one who managed to Follow The Leader the longest. In a big, expansive map, this would be awesome.

Remember playing Tag as a kid? It was awesome. So why not a gametype based around that? Whoever is "It" gets a small speed boost that means the players who don't want to get caught have to apply some strategy as well as good moves in order to avoid being "It". Maybe make multiple people "It" or even introduce a Balltag option (ball alone OR ball and touch to make someone "It") to keep things interesting. The winner here would be the person who managed to not be "It" the longest.

Or, if you want to play up the Cops vs Runners angle, make that a game type! Either A.I. bots or a certain amount of players get guns and have to shoot Runners trying to get packages from A to B. The next round it switches and the Cops and Runners switch off. This simple premise you could pour a lot of gametypes into... Runners that need to co-operate so one Runner can deliver a package, Runners that need to compete to get to a package first and keep it away from the others while they dodge the cops, too... Lots of possibilities, here.

And of course, you could always do obstacle-course style races, with moving, whirling portions akin to shows like Wipeout or Takeshi's Castle... Courses clearly designed solely for the purpose of confusing and delaying anyone trying to run it.

And I'm not talking anything simple, either. I'm talking the sort of crafting you can do with Halo's Forge World option. Give me a sprawling damned city (and a couple others for variation) devoid of decoration in which I can place cranes, walkways, fences, and basically allow me to play with the engine, set event triggers and give the editor more options within the level than "Get player from Point A to Point B."

One of the huge advantages that this sort of thing provides is longevity, and it also might lead into something more. Some gametypes that see regular play in Halo: Reach began as nothing more than one fan's ideas. Stuff like Grifball.

Ideally this sort of thing would have a method for sorting the quality goods from the crap, but even having a level editor would be an excellent start.
#Community    #Rants
Login to vote this up!