Would you support Stephen Colbert in Marvel vs Capcom 3? If so, spread it!

( http://en.wikipedia.org/wiki/Stephen_Colbert_%28character%29 )
Despite having withdrawn from the presidential race, Colbert continued to be referred to as an active candidate in the Marvel Universe. Colbert '08 paraphernalia appeared in the artwork of various Marvel comics,[49] and Colbert himself teamed up with Spider-Man in the October 2008 comic Amazing Spider-Man #573.[50] On November 5, 2008, Marvel announced that its fictional newspaper The Daily Bugle was reporting Colbert's victory over both John McCain and Barack Obama.[51] However, several hours later Marvel released a second Daily Bugle article correcting its initial reports, stating that while Colbert had won the popular vote Obama had secured more electoral votes, thus winning the presidency. "Oops, our bad", said Marvel editor-in-chief Joe Quesada of the confusion. "We completely forgot the Marvel Universe reflects what happens in the real world."[52]

Of interest is that Stephen Colbert was given Captain America's shield by Marvel. In real life. Seriously. You can see it on the shelf in any episode of the Colbert Report. Marvel also created a mock comic cover for his own series, which doesn't actually exist yet.

Stephen Colbert is, in fact, now a substantial Marvel character.

PROPOSED CHARACTER TRAITS:
The current idea that I'm really stuck with is that this would be regular, suited Stephen Colbert wielding a large American flag as a polearm, since it's generally understood that this is his primary weapon. Naturally, he should also be able to occasionally use Captain America's shield. Other than that, you know the creative teams at Marvel and Capcom are more than capable of giving him a viable, interesting moveset. But for speculative purposes -

Special: Commanding Stephen Jr. the eagle to attack.
Special: Throwing Captain America's shield.
Hyper: Pulling his teleprompter out from behind the screen and beating his opponent with it.
Hyper: This: 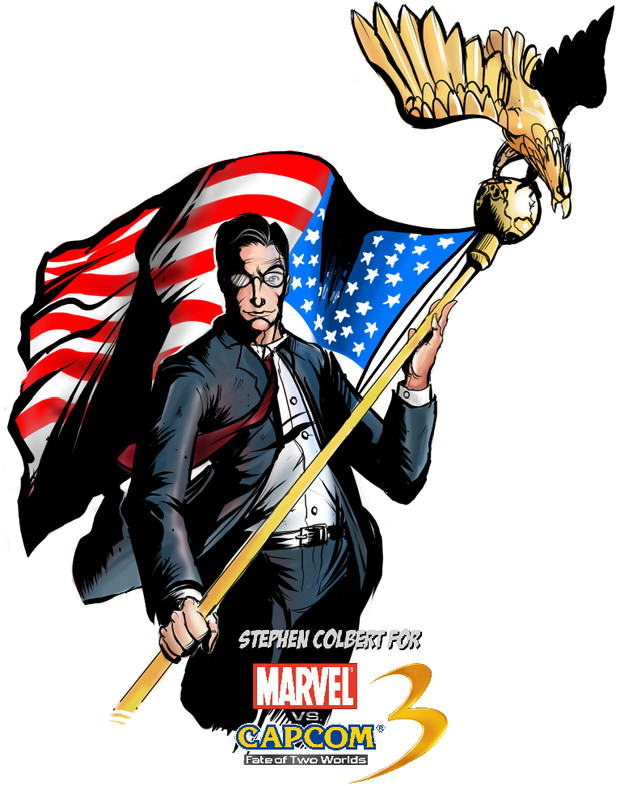