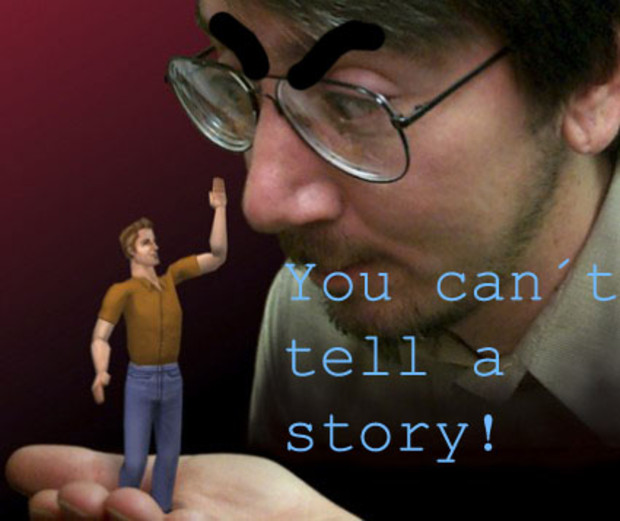 A couple of days ago I received the Kotaku weekly newsletter promoting stuff from their site, in it was an article about a guy disagreeing with a statement from Sim city creator Will Wright . Will Wright tells CNN that "Games are not the right medium to tell stories. Video games are more about story possibilities." The whole CNN article is here And you can find the Kotaku article about a guy who thinks� that he is wrong here

I�m not the guy who usually gets upset about quotes since they�re often taken out of context only to confuse and provoke people. But in this case after reading the Kotaku guy�s story and the original interview with CNN It seems like this Will Wright dude is out of his mind . I mean there are loads of examples of great storytelling in games!

He also goes on to say that he thinks Games are meant to let people "create their own stories,"

I agree with the guy who wrote the Kotaku article saying that Videogames probably isn�t the right platform for Wright to tell his stories but may be for others. Even I came up with a story that is better suited for videogames than any other medium I know of.

Imagine something like this:
You assume the roll off a bullied kid, everyone rejects you and kids are being mean to you as only kid�s can be. You�re only friend is a girl who possesses magical �healing� powers (lol just go with me here). The girl supports you and you really root for this guy, you want to see him triumph and the �evil� side of you maybe even wants him to have his revenge upon the bullies. The girl blindly helps this guy but one day after helping him she senses danger, the main character snaps and kills her in a gruesome way only to receive her magical abilities. He then proceeds to kill off the rest of the village with his newfound powers.

Even if you thought that this story was really lame, wouldn�t you say that playing as the villain without knowing it makes it infinitely more gruesome to discover that in fact it was �you� who made all of this happen? Then there are games like Heavy Rain that tries new ways to tell stories, for me that�s proof that video games are perhaps one of the more effective ways of telling you a story because it requires something from you in order to make things happen.

In my point of view this is only one kind of storytelling that truly shines in videogames and I bet there are loads of other techniques that only feel �truly� optimized when used in videogames, what do you think? Have I lost my mind or am I missing out on something here?


Oh, I came home drunk this weekend and saw That Holmes wrote that Bit Trip Fluxx was out here in the EU, so I had to download it xD Hopefully this will be the first bit trip game that I get to finish, not just smack my tv set around because the last levels/boss is overly diabolical.

Oh destructoid, what would I do without you?

Urgh... did I make a fool out of myself again? xD
#Community    #Industryevents
Login to vote this up!