Whilst walking my sisters dog (I'm a nice guy, aren't I?), I happened upon a rather eccentric acting homeless man. He confronted me and offered me a trade, if I gave him the mighty sum of 50p he would let me take an item from his box. I at once recoiled in horror, but thankfully he produced a small, tattered cardboard box from beneath his long, shaggy coat.

The box contained a deflated football, a bottle of Irn Bru filled with an unknown liquid, "Atlas Shrugged" by Ayn Rand and a bunch of loosely clipped papers. Upon closer inspection the papers appeared to be random pages from a script... a script for a Podcastle film! When pressed on where the script came from, he simply stated he collected it on his travels and would say no more. I gave him the 50p and was on my way.

I have now scanned the few pages I have for your enjoyment, enjoy. 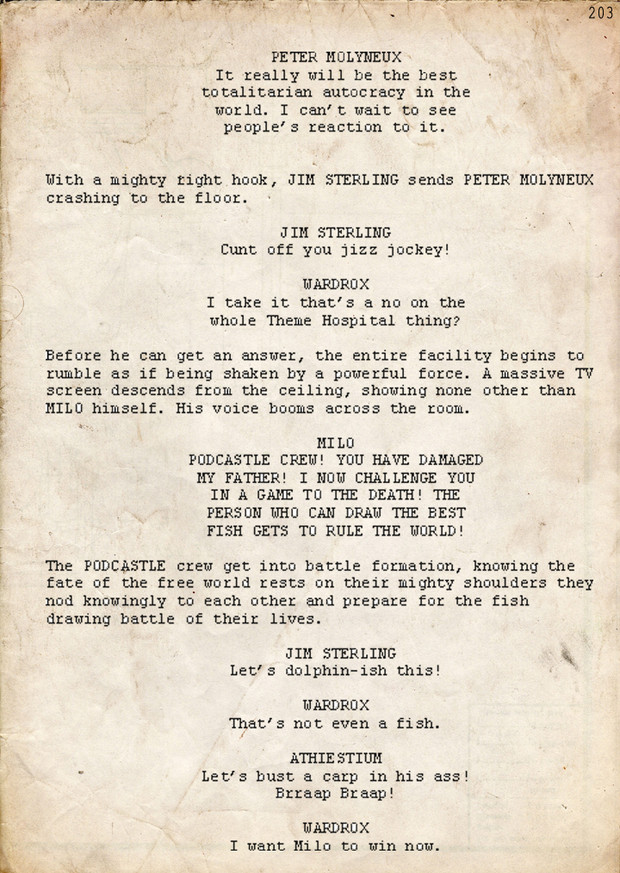 Sadly that is all the pages I had. Will we ever find out the ending to this epic? Will the Podcastle feature film ever be realised? Sadly I think not, once Jim moves to America I think it's all over.
#Community    #NOTvideogamesrelated
Login to vote this up!