Groundhog Day: Don't Look Down There! 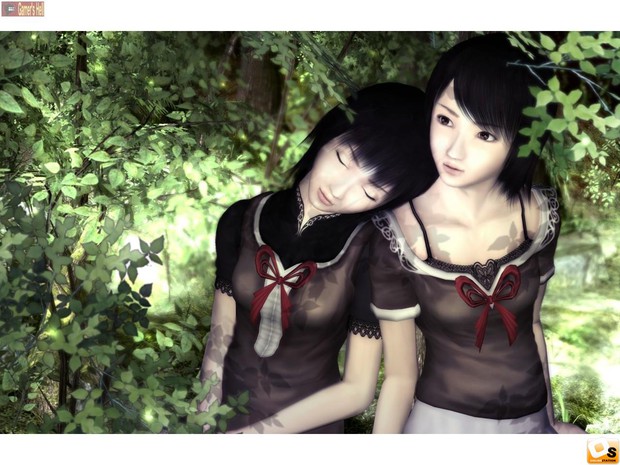 This is not the ending.

It sure sounds pretty
Sound design means a lot in a horror game. Fatal Frame games have never been ones to feature a big, orchestral soundtrack, but when there is music, it is, more often than not, done right. Subtle sound effects and background tracks enhance the mood, without the use of any orchestral swells or the like to let the player know �Hey!! Something SCARY is gonna happen! Are you surprised now?� To supplement ghost battles, we get creepy noise and whispers and pleas for help from the spirits, which is really great for setting the mood. Also, the English voice acting is surprisingly rather competent, leaps and bounds better than the hammy first installment. Oh, and then there�s this.


So, upon reflection, it�s sort of easy to see why I keep coming back time after time to such a game. I have plenty of fond memories about wasting film because I couldn�t differentiate between the two Kiryu twins, about getting lost in the rather huge village and the mansions it contains, and, of course, of going on politically in-correct rants about why I was so angry that, despite her bum leg, Mayu, the protagonist�s older sister, whines about being left behind when she doesn�t even start walking until Mio is a good 20 paces ahead. Then, laughing at her Gimp Warp Speed when she teleports through a door that�s in the process of closing. It�s a game that gave me countless interesting nights of screaming at the TV together with friends, or just by myself. And I don�t think that�ll change anytime soon. With a Wii remake on the way, assuming either Nintendo or the fans find a way to play it on US Wiis, I can guarantee that I�ll be reliving Fatal Frame II again. With waggle! So despite it not being my favorite game of all time, I�m stuck in an endless, Groundhog Day loop of playing over and over and over�