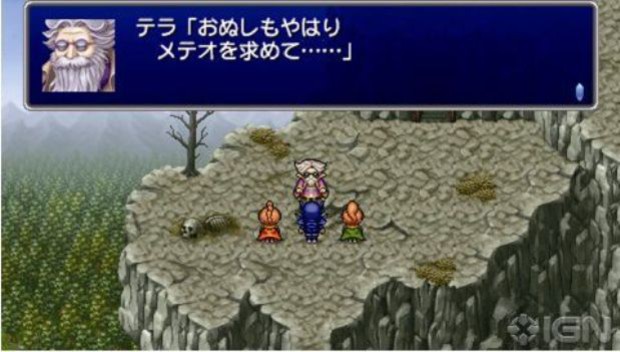 If this sounds completely ridiculous, I really can�t blame you. The only defense I can give you is that I keep going back to Final Fantasy IV because I grew up with it. This game influenced me more than I would like to admit and, as such, I feel a very strong connection to it. It came at just the right time in my life, when I was young enough to be affected by it but old enough that I would understand it. That�s why I return to it time and again and have this compulsive urge to own every version. I feel like I have this vested interest in what Square does to this beloved game of mine that they have seen fit to update and alter every few years. The fact that Square even sees fit to do this to FFIV, out of all the games in the series, is rather remarkable. I�m not the only person who can�t stop coming back to FFIV, because apparently Square-Enix�s own staff can�t stop either. I choose to believe that this is because this game really is something special and I�m far from the only person who was so deeply affected by it.

I hope I continue returning to Final Fantasy IV throughout my life. I hope that, one day, I will get to show my children this amazing game. Even if they see just a little bit of what I see in it, I will be overjoyed that such a connection exists.
#Community    #OpinionEditorial
Login to vote this up!