My preview of the 3DS

7:43 AM on 02.21.2011 (server time)    0
Last month, I had the opportunity to go and play on a 3DS, at their event being held in Manchester (UK). I was lucky enough to get a ticket, as I had previously been to Eurogamer last year. I was so excited when I got my e-ticket sent, but I was also a little worried. I was worried as the timeslots for the event were every 30minutes, so I assumed it would be a really brief look at the 3DS, but I was wrong. 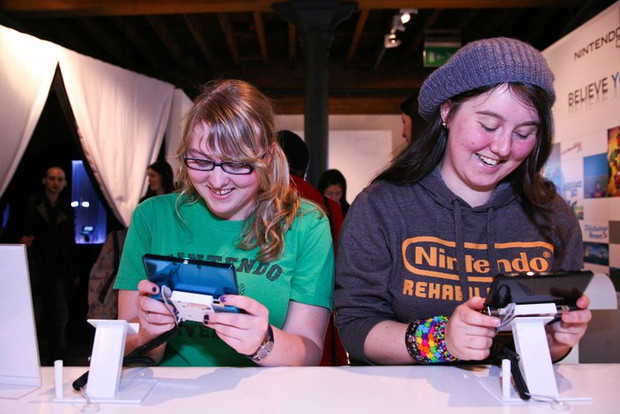 Above: Me and my housemate creating our Miis.

Nintendo sure know how to create a good event, within a short time limit! The event was 1 hour overall, but there was so much content packed into the tour.
When we first got there, there was a group of about 20 people gathered in a small room, with Gameboys, Game and Watches, etc etc, in glass stands. There was also this awesome floor, interactive, thing. Really not sure what it was for though!
Anyways, the first room led us to a Street Fighter re-enactment. It was pretty good, but I couldn't stop laughing when they both 'used' Hadouken; they done the move but then stood in that pose for 5 seconds, just staring each other down, til they drew their match.
After this, characters from Resident evil started yelling at us, telling us to "Get down on the Floor!", "Grab onto the person in front, and pray for you life!" and of course "Watch out for zombies!". It was an experience; zombies grabbing onto my leg was not something I was expecting at a Nintendo event. BUT. It was very fun. :3
Straight after all the crazyness of the performances, we got to watch a preview video of all the announced games so far, for the 3DS. Then we moved onto playing it!

P.s. I also have a video showing the above things. I wasn't allowed to take videos of the 3DS though. :(
Click here to see!

I went to the event already wanting (and had pre-ordered) a 3DS, so obviously I had my opinion before even playing on one. However, my 'want' level rose twofold when I started playing 'Kid Icarus' and 'Legend of Zelda: Ocarina of Time'.
First of all, I really didn't know what to expect of the 3D side of things. I had no idea if it was going to be right in my face, or what. So I didn't feel disappointed or anything when I actually saw it. I found it to be quite a subtle 3D, so that it didn't hurt your eyes, but it made the graphics crystal clear, which was great! One issue I found whilst playing though, was when the 3DS was tiled to the side, even if it was slight, it broke the 3D. Doing this would make two of everything on the screen appear. So when playing the 3DS with the 3D turned on, you have to play it upright, and straight ahead.
When I used the slider bar to see if the 3D turned down gradually,I didn't really see the gradual effects, it was either on or off. Which wasn't really an issue for me, but I was expecting it to slowly go up and down, depending on where the slider was.

The size of the 3DS, was roughly the same as the DS Lite. It was also very light to hold, and it felt quite natural holding it.

I played quite a few games whilst I was there; the games being: Kid Icarus, Legend of Zelda, Street Fighter, Nintendogs and cats, and Lego Star wars.
I first played the demo of Kid Icarus, which was extremely fun. The graphics were lovely, voice acting was good, gameplay was good too, but I felt it was a little complicated without a stilus! (I asked for one, but wasn't allowed it) I can definitely see Kid Icarus being a cult game for the 3DS. I just think the controls for the game may take more than 5 minutes to learn!
Legend of Zelda: Ocarina of time was jut epic. Just seeing Link in 3D made my heart melt a little inside; the game I played growing up as a kid was being re-released. It just made me feel happy playing it. The demo I played was based inside of the Great Deku tree, where I was killing spiders and such. The gameplay felt very natural, and I found myself picking up the controls quickly, as opposed to Kid Icarus.
All of the other games I played were very good too, but I thought I would just talk about the main two in this post.

Other features that I got to try out was the Mii Maker feature.
All you have to do is hold the 3DS about 20/25CM away from your face, and take a picture of your face. The 3DS then takes your picture and creates a Mii for you! however, before you Mii appears, you have to tell the 3DS your gender, birthday, eye colour, hair colour and style, and height. Before using the Mii Maker, I thought it would grab your hair and eye colour from the picture, but it didn't. Once this information was processed it created my Mii! Which did look surprisingly like me, so I was quite happy with the result. For those who aren't happy with the end result, are able to alter the Mii to however they want!

Another feature I played with was the alternative reality cards! These were SOO FUN! Like, ridiculously fun. For this feature to work, you have to hold the 3DS about 30CM away from the card, and then wait about 5/10seconds for the 3DS to process the card. Once the card was processed, a set of targets around a circular table appeared on my screen. I had to hit the targets using the shoulder buttons, and as I moved the 3DS around the card, on the screen I was moving around the table. There was no lag what-so-ever! After shooting numerous targets, I found myself trying to find the last target. I was looking all around the card, until the 3DS told me to look into a hole that appeared on the screen. In that hole was the target I was missing! After that target, a dragon appeared on my screen, and I had to hit numerous parts of it's body to kill it. This then led to the end of the alternative reality.
I found myself super impressed by these cool features on the 3DS, and cannot wait to try more out!

Overall, I was very happy with what I saw and played and I am definately buying one, with Super Monkey Ball. (Although this will be traded in when Paper Mario comes out! <3)
#Community    #DS
Login to vote this up!

Well, my name is Shauni Maple. I am 20yrs of age. AND I FUCKING LOVE GAMES.

I've been playing video games since the age of three, and to this day I am constantly playing games; I am a hardcore fan of RPGs and JRPGs. However I do like classic point-and-click games, like Grim Fandango, Curse of monkey Island. Diskworld is pretty neat too. I have played every Final Fantasy game, and beaten 1 through 10-2. ;3 (Some 100%). And my boyfriend has gotten me into rhythm games like, DDR, Elite Beat Agents, etc etc.

But yeah, living in the UK is fun, due to being able to do Games Design at Bolton University <3 Game releases can be awful over here though!

Aswell as loving video games, I love anime, manga, drawing and anything Japanese really. :P I also love my wonderful Boyfriend of 4yrs and 5months, who is doing Computer Software and Development at Bolton University.