Welcome back everyone! I hope you enjoyed your visit last time around . If so then you will LOVE your visit today!

Now this post is going to be very image heavy as I've decided to forgo a part 3 and just dump the rest of my 5 month haul here. For your viewing pleasure.

I'll start off with some things that I missed the first time around, as usual I will go from the older stuff first then move on to the more current and finally finishing things off with swag and things of that nature.

Up first we have a couple of vintage handheld pinball games.

As you can see the box is in great condition, as is the unit itself (see below)

I was worried at first, as I am with any old electronic that there would be a ton of corrosion on the battery contacts and that the unit may not function. That was not the case. The battery contacts were clean and this thing runs like a champ. They just don't make electronics like they used to.

It's always nice to get something old like this in the box, it's better when you open the box, take out the packing and find all of the original inserts nice and tucked away, as we see here;

Man, look how happy those kids are playing those archaic handheld games.

Here we have another handheld pinball game.

I have to admit, I was a bit bummed when I realized the top of the box was missing, but when I took out the contents of the box that bummed feeling quickly went away.

This is one of the cleanest vintage units that I've ever seen. The unit itself has not lost any of it's coloring and the screen is scratch free. What really caught my eye though was the styrofoam and booklet, which were both in excellent condition.

So that's it for the vintage stuff. Moving a bit forward we have the one and only Sega Genesis game this go around but damn if it aint a good one.

Gain Ground for the Sega Genesis

I LOVED this game when I was a kid and I was totally stoked to find it sitting on a Goodwill shelf, all alone and looking sad. It now has a good home and will be played like mad once I move and get my Genesis hooked back up.

Hey! Guess what time it is!??! It's PLAYSTATION TIME!

First off we have a couple of Harry Potter games for the original Playstation.

The only reason that I picked these up was because of the price, hell for a $1.99 a piece you really can't go wrong.

Next up we have a couple of Playstation 2 games

Dr. Muto and Tak and the power of JuJu

Once again the main reason I picked these up was price ($1.99 at Goodwill).

Hey I know! How bout we take a look at some PSP games?!?! Sound good to you? Good, me too.

I love my PSP, besides my 360 and DS it is my third most played system. I really want to get in to the Monster Hunter games because I've heard such good things about them.

I can't say enough good things about the Prinny 2. If you loved the first one then you will love part 2. Prinny is definitely one cool dood and deserving of his own game series.

I really want to start the Star Ocean games and I've always loved Gradius. All in all good finds here. 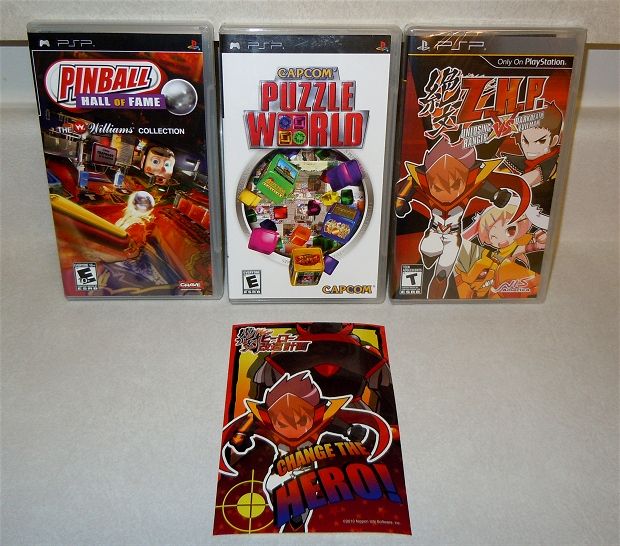 And last but not least for the PSP games we have;

I absolutely love the Ys series and The Oath in Felghana is a GREAT addition.

Before we get to the PS3 stuff I have one more thing to show;

I didn't even know this thing existed until I found it on the Goodwill auction site. Check this badboy out!

And finally so you can see how big this sucker is;

My kid loves being my model for these posts, as you can see she was quite happy to pose for the picture.

Medal of Honor was a decent game, and Nier is actually quite fun.

Oh Sony Move, how I wish I could love you. I was not impressed with The Shoot and Time Crisis was ONLY playable on arcade mode (the regular story mode is reallly, really bad). SWTFU 2, in my opinion is way better than the original and well worth a playthrough (even though it is quite short).

I will eventually get around to playing this game, it sounds quite interesting.

And finally for the Playstation stuff we have;

I couldn't wait for this game to hit and when it finally did....well let's just say, it was WELL worth the wait. Of course I had to get the collector's edition, which comes with this totally awesome replica Plasma Cutter;

Oh, did I mention it totally lights up in the dark. Awesome.

Legacy of Kain Defiance, Max Payne 2 The Fall of Max Payne and Metal Gear Solid 2 Substance all for the original Xbox.

So who needs BluRay when you can have awesome HD like this!?

Honestly I didn't really need this as I have a PS3 that I use for my movie watching needs but for the price ($10.00) I couldn't pass it up. I have hooked it up and can honestly say that the picture quality is pretty damned impressive.

Motion gaming seems to be all the rage these days doesn't it? Yea well fortunately for the gaming companies I'm a sucker for all of this stuff, as seen below;

Kinect was pretty fun the first couple days that I used it but it's been collecting dust for a while now and unfortunately I don't see it getting any real use any time soon.

I loved Castlevania LOS (thought it was better than GOW 3) and really hope they do a sequel, RDR Undead Nightmare is amazing as is RDR. Enslaved was OK, wish I had bought it used but oh well. Vanquish was decent and I haven't played Deadly Premonition yet.

If you haven't picked up Majin and the Forsaken Kingdom yet then you need to, this is a great game and it would be a shame if a sequel never came out.

The only reason I bought Dead Space 2 for the 360 was for the multiplayer as I have more friends on the 360 than the PS3.

Now on to some collector's editions.

The RC car is pretty cool and the camera works quite well.

It's a shame that the 360 Faceplates never took off, the one that came with DeathSmiles is really nice.

I was really psyched when this came out and I really liked the game but for some reason I just couldn't get in to it like I did with Fallout 3.

So that's it for the Xbox stuff.

So I really love Dead Space, like REALLY love it so much so that I went and bought this;

Of course my daughter wanted to model again. I really want to use the backpack and will eventually. When I ordered the backpack I knew that I was getting a t-shirt (because they ask you what your size is) but I didn't know what it would look like, I also didn't know that Visceral Games would be sending a little something else....

And here's the little something else;

Dead Space Lithographs!
Seriously, the lithographs are AMAZING and I was totally not expecting them.

So in my last post I ended with a picture of some posters and had mentioned that there may be more. Well, there are more. As seen below.

This poster measures 2ft by 2ft and looks awesome.

These posters are a bit larger than the one above, these measure 2 foot tall by 3 feet wide.

Now THESE posters are much bigger than the ones above, these posters measure 4 foot tall by 3 foot wide. Now I have to give mad props to my local GameStop for hooking me up with these posters, I'm gonna miss those guys and gals when I move.

And last but not least for the posters we have this fella;

I really like this one, this is a poster version of the Game Informer artwork that was on the cover of Game Informer several issues ago.

Well, that about wraps it up. Sorry that it was so long, I'm gonna try to be a bit more proactive on posting my hauls, this whole waiting 5 months shit is really taxing on my hands.

Hopefully you've had fun looking through my stuff because I've had a ton of fun collecting it. When I finally get moved and settled (this summer) i'll post a setup blog so that you can see what all this stuff looks like when it's all put up and organized.

Until then happy gaming and good hunting!

~ChillyBilly
#Community
Login to vote this up!