2:45 PM on 02.12.2011 (server time)    0
Dag yo! So, it’s time for yet another blast from the past. This time I bring to you what HandsomeBeast requested last week . . . posters and miscellaneous! Hahaha! =P I also do have some VERY special Katamari Damacy art as well. Once again, these things have been acquired over the past 5 months or so from things like EB Games’ pre-orders or just them having them to promote games, some eBay “friends,” and a few other odds and ends tossed in. You’ve also got an appearance of some DOMO stuff and some autographed stuff from the super awesome and fantastic LIGHTS! This may not be my most “exciting” haul per se, but hopefully you all enjoy it. Before that though, keeping with tradition . . .

Hey y’all! The Xbox 360 is totally, hands down, the best system ever! I’m totally not some bias, piece of shit troll, since I totally own a PS3 and Wii as well. But if you can learn from my preaching and admit the 360 is totally better, then I guess we can be friends. If not, it’s YOU and totally not me (since I’m NEVER responsible for anything and if you point out anything that I don’t agree with, you’re totally against me and you’re totally wrong) who isn’t grounded in reality and stuff. Plus, you guys totally don’t know what a “community” is, where it’s not the people that are always on the site, conversing with each other, and are cordial to one another. It’s totally about bringing your friends from outside the community, having them totally just obey you cause they’re just as totally not retarded as you, then vote or lobby on community run things for you. Also, if they commented on like one of two of your own blogs, they’re totally part of the site and all guys! ^_^ On with the show! 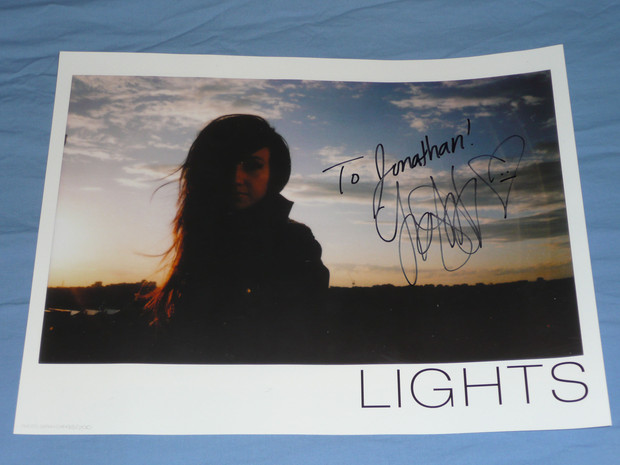 Shortly after her tour, she put up some limited edition, signed posters up for sale on her site, so naturally I jumped on this quick and got number 93/200! I’ve seen some of the other posters from other fans, and she made all of them unique with different hearts, smiley faces, etc. I’m pretty happy with the heart, but have to question why there’s the “serious” face in it . . . hahaha! =3

Well that does it for another edition of A Compulsive Collector’s Haul! Sorry for the 2 week absence, but I’ll hopefully be able to have another one up tomorrow, since the blogs have been FULL OF FAIL lately, which is really depressing. I think I’ll do “new” games tomorrow from the past 5 months or so, so if you’re interested in that, be prepared. Also, Japan pictures are still coming, I promise! Until next time, latez mates!
#Community
Login to vote this up!