9:42 PM on 02.07.2011 (server time)    0
Hey everyone. Tonight, we had a rather entertaining episode of The Destructoid Show ready to go up, but the evil ghost of Jonathan Holmes that haunts our studio set fire to several of the editing bays and our producer, Zac Minor. It was a true american tragedy, and one that could have been prevented if we'd bought robot guard-dogs like I suggested.

The audio was all out of sync, which makes videos almost as unwatchable as when the audio is N*Sync.

My girlfriend's out for her friend's birthday, and I'm home alone, so I figured I'd write in here. Been quite a while since I posted anything, and even longer since I posted anything that wasn't about Bulletstorm. Since then, I've gotten quite comfortable hosting the show -- or at least I'm enjoying the fuck out of it, and not feeling terrible nervous beforehand -- and I've started actually writing some posts for the main page. It's pretty exciting to write stuff and have people actually read it. Makes me feel like less of an on-camera-only Ryan Seacrest-ish douchebag. Writing is something I really love doing, even if it's about professional wrestling games for the iPad.

If you guys recall, we did that ridiculous Charity Water livestream a while ago, and I was mailing drawings to anyone who donated twenty bucks or more. I am almost done doing that, I think I've got one more letter to send out. If anyone doesn't get theirs, shoot me an email at [email protected], and I'll make it happen. My inbox is jam-packed full of sexually-charged emails from Tara Long, as well as threatening notices from Cliffy B's lawyers. Hah, I kid, I kid. (Tara usually just sexts me.)

On a relevant note, can you believe that whole sexism debacle with Jim Sterling and Anna Anthropy? I'm not trying to open up that whole can of worms again, but I think both of them were acting like a couple of obnoxious teenagers. I don't think the issue is homophobia or sexism, I think it's plain and simple civility. It's 2011, and we're (sort of) adults. Calling a woman a cunt is never going to go over well, and telling a man he's a closet homosexual... Well, that'll probably make him want to call you a cunt. There's a fine line between friendly rivalry and two people screaming insults back and forth at each other in 140 characters or less.

That whole ordeal just made me facepalm, and then imagining what it would be like if everyone in this industry put their differences aside and did our own rendition of We Are The World.

But ew, fuck that. I should probably say something inflammatory on the show sometime soon, it's been a while since I got anyone properly pissed at me.

I dunno if you guys saw, but earlier, I linked to my old DeviantArt page on Twitter. It's from like, four or five years ago, but I feel like we know each other well enough now. Go check it out, there's shit on there dating back to high school. Here are a few cherry-picked favorites: 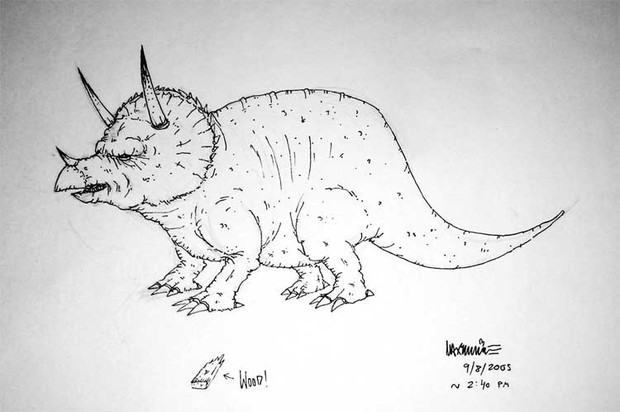 There you have it. Old things. Lots more on the DA page.
#Community    #Rants
Login to vote this up!