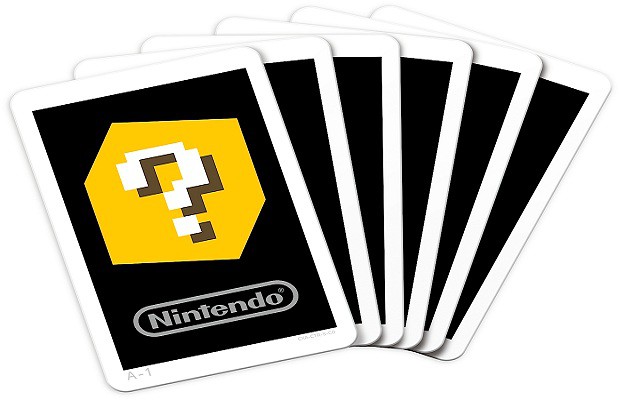 The second game involved focusing the camera on a card with an old-school Mario question block on it, from which targets and enemies burst forth. It's impressively done - considering the potential for horrible motion blur in these games, it really wasn't too bad - but unlikely to be played more than once. Having to physically move the 3DS to target, let alone having to find a flat surface to place the card on - the game pauses if the camera loses track of the card - and then move around it, also defies the very nature of a portable gaming experience. It's clearly designed to be done at home. Since the second game made use of the fact that its card was placed on a plinth by putting targets on the side that you had to duck down and walk around to reach, it raises questions of how this will work when most people will be putting their cards on much wider surfaces? In any case, since these games require actual movement in a 3D space, they're the only ones that really based their gameplay around the effect (and featured a nifty dragon) and it showed off the tech better than any other game at the event. That said, they were both pretty insubstantial and only highlighted how little 3D had added to the more conventional gaming experiences elsewhere.

Other games I played included Ubisoft's Rabbids old-school platformer, which just about reaches the bottom-of-the-barrel standards of any Ubisoft launch game. The 3D effect gave the backgrounds a bit of pop, but had not one iota of effect on the laughably generic gameplay that conveyed approximately nothing of the anarchic spirit that has made the Rabbids series a tempered success. Nintendogs and Ninten-cats (I don't know how you're expect to spell that) had reasonably good graphics but was ridiculously limited in function - you could call either pet over and then give it a rub, made slightly uncomfortable by the fact that most of the styluses (styli?) had been nicked earlier in the day, then move onto the next one. 3D was functional but continued the running theme of adding nothing to the gameplay. The trailers for Animal Crossing and Mario Kart were okay but looked exactly as you'd expect those two games to look. The 3D for Animal Crossing was barely noticeable, while on Mario Kart it made the scenery and track obstacles more dynamic but didn't bring much new to the ever-familiar series. The Metal Gear trailer was not encouraging, with jagged visuals and 3D that seemed to get the depth of several objects and characters slightly off. There was also a trailer for 3D television and movies but given the small size of the screen and propensity for blurring, other than allowing another selling point on the back of the box, signs were equally unencouraging.

For all the hype the 3DS has been getting, the reality was that system did little for me other than to offer a more powerful DS with an excellent analogue stick. The 3D was not so loathsome as I had found it playing Killzone 3 at last year's Eurogamer Expo, but mostly on par with my experiences in the cinema: an unwanted distraction. Your reaction to 3D films will most likely define your reaction to the 3DS. The upside of not having to deal with glasses is negated by the sometimes horrible distortion created by moving the system away from its visual sweet spot, although since up-and-down movement isn't as bad as side-to-side, this probably won't be as bad on transport, where handhelds are likely to get the most use, as initially feared.

But for Ł230/$250? No dice, Chicago. I didn't get much playtime from my DS because many of the games I played on it didn't seem designed to be played on the move (Spirit Tracks and its bloody microphone pan-pipes reacting to external noise being the worst offender) and the 3DS looks likely to compound that irritation. Handhelds increasingly seem to be trying to replicate console gaming - see Sony's NGP for further evidence - sacrificing the attributes that make portable gaming worthwhile. The 3D wasn't the worst I've experienced, but was superfluous enough to most games that its issues tended to detract from the experience rather than add to them. So if shelling out a few hundred notes for a more powerful DS and an analogue stick sounds good to you, there's no reason not to take the plunge. You can turn the 3D off, after all. But as for revolutionising the gaming experience, the 3DS adds a dimension but is distinctly lacking in depth.

MOST RECENT FLIXIST FEATURE
The Mouse Trap: How Disney got all Tangled up
#Community
Login to vote this up!