4:16 AM on 02.04.2011 (server time)    0
Hey again all of you. Thanks for your support. I have a plan now. The game I'm going to produce is nearly finished being designed. I will start coding once the fan-fiction story is finished. And only after I have caught up on all the art I need to do. The project is going to go under the name Roguecraft as a project name. I'm a fan of RPG's but have recently taken a liking to Minecraft and Rogue-likes. I'm sure a more suitable title will come to me later. But that's all details. Ten more chapters left! 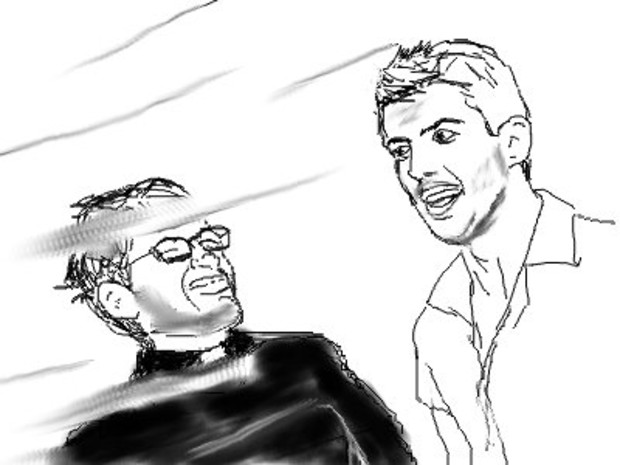 �It can�t be�� Beyamor�s heart sank into his stomach.

�Oh yes.� Anthony explained. �Did none of you realize?�

�You were supposed to be on our side.� Beyamor grew tense. �You killed her! How could you! What kind of abyssal monster are you?�

�I�m somewhat surprised.� Anthony said fidgeting with something under his robes.

�Well�� Anthony went on. �You seem calmer than I intended. I thought you�d be trying to kill me already.�

�So what are you waiting for?� Anthony raised an eyebrow.

�I�m waiting for you to tell me why you did it.� Beyamor said.

�Tell me!� Beyamor said. The ground shook underneath him as he said it. The sky was gathering clouds over him. The night was humid. The wind swirled around them.

�What do you want to hear Beyamor?� Anthony taunted. �Nothing I tell you is going to make any difference. But, just to see the look on your face, I�ll tell you this: Ashly was my sister. She was dangerous. She had the one ability that I feared most. She had the ability to annoy Anthony Burch. That�s me.�

�And for that, she had to die!� Beyamor said. �She was your sister!�

�You underestimate how annoying she can really be.� Anthony said. �She nearly annoyed me to death once. I find it strangely amusing that she didn�t tell you anything.�

�We were in love.� Beyamor floated above the ground. �You� ate� her��

�I�m going to kill you with my bare hands!� Anthony ran towards him.

�Die monster! You don�t belong in this world!� Beyamor yelled above the screaming hurricane.

Anthony�s robes fluttered violently in the wind jumping in the air towards Beyamor�s flying body. He pulled back, winding up for a punch and Beyamor clenched his fists. Beyamor�s will raised wind's power and focused the flow of its energy into Anthony. Anthony stopped in mid air and fought against the current but was blown back far into the distance, landing on broken asphalt.

Beyamor flew higher into the air and stalked Anthony. He saw him get up, seemingly unhurt by the first blow. Beyamor shot three quick blasts of lightning into Anthony�s chest and lit him up so hot that his skull showed through his skin. Anthony dropped to the ground on his knees, his whole body steaming but still alive.

�He should be dead,� Beyamor thought. No one had ever taken that many lightning bolts that was human. Beyamor tried to guess at Anthony�s abilities. But, the only thing he could think of is that he had healed a bunch of people right in front of him. Perhaps it had to do with healing. Beyamor suspected he could heal himself while in battle. And there was another feeling, he couldn�t quite put his finger on it.

Anthony turned his head to Beyamor to look and see where his attack would come from next. But, before he could see anything a tornado touched down and flung him up into the air. It was a nightmare. �No�� Anthony thought. �This is more than a nightmare. I might die in this tornado.�

The pressure of the wind gusts pelted him and forced his eyes closed. Debris hit him from every which way, requiring him to clench his whole body and try not to get torn apart. Lightning came through the tornado and slammed his face so many times that it started melting. He went through his healing process constantly, but the storm was too much for him. He couldn�t continue to defend himself. He had to go on the attack.

Anthony screamed but he couldn�t even hear his own voice in all the noise. He twisted and turned in the air. The debris tore at his face and arms. His leg cut clean off and there were pieces of metal darting through his chest. He couldn�t breathe and felt a heart attack coming on.

Beyamor felt his strength being sucked away from him. That was the feeling he was trying to pin-point. He looked at his own hands. They were wrinkled and old. He was beginning to have trouble breathing. Beyamor wondered if he could last. Slowly he started falling. The wind, not enough to carry his weight.

They both dropped to the ground. The fog was cleared for a time and the two of them lay defeated next to each other. Anthony lay bleeding out with one of his legs decaying a mile away stuck with wires and shards of junk in his body, some digging deep within his skeletal frame. Beyamor crawled towards him. As he got closer he could see Anthony�s cells fluctuating, healing his wounds, bit by bit. Anthony�s leg even seemed to regenerate, his flesh becoming younger, then older again.

�I should have known it was you.� Beyamor choked. �You bastard. How many people did you kill? Thousands? And no one will ever know. I have to kill you here.�

Beyamor�s old body slithered above Anthony�s body. One of his legs grew so brittle that it cracked as he crawled towards him. Luckly he was already numbed from the pain from his body being battered from the fall. Once he was right on top of him, he noticed Anthony was somewhat paralyzed. Anthony didn�t move anything but his mouth, which started to upturn into a smile.

�You can�t do it can you.� Anthony said. �No one has ever� ever been so close to killing me before. You truly have a gift, my friend. But you will wilt away into dust just like the rest.�

�Not� Before I� Gouge your eyes out.� Beyamor slowly grabbed Anthony�s skull on one side. �You think you�ve defeated me? You don�t think I know what I�ve gained, for my wife?�

He only had the strength for one more push. Only one of his eye sockets. That would have to do. Beyamor pressed into it popping out one of Anthony�s eyeballs making a squeaking sound that resembled a wet balloon. Beyamor slumped over, hoping his weight would be enough for his thumb to enter Anthony�s brain.

Elsa sprinted back to where the storm was coming from. It had all died down before she got there. And there was Anthony lying there by himself, Beyamor was nowhere in sight. But, she knew after seeing the ashes that Beyamor was dead. She pulled junk and metal shards from Anthony�s body and tried to poke his eye back in place. He seemed limp, and he wasn�t breathing.

Anthony flailed around as he vacuumed in air like it was the first breath of his life.

�Elsa,� Anthony said once he was able. �Looks like I owe you another favor. Let me guess��

�Make me young again.� She said.
#Community
Login to vote this up!