5:22 PM on 02.03.2011 (server time)    0
Hmm. When I first heard the Monthly Musing topic a few games I routinely play over and over again flashed through my gamer mind. Civilization 3 (PC), Worms Armageddon (PC), Rez (PS2), Sniper Elite (PS2), Demon�s Souls (PS3), and many other games I replay a ton were considered for this blog by the lazyhoboguy who is currently writing it. I realized though that one game I own is the king, the queen, and the undisputed top monkey of replayability. The game of which I speak is: 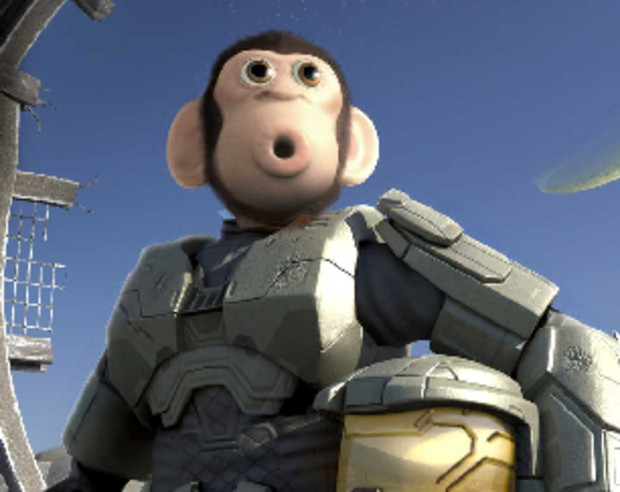 Why do I love this game so much? Why have I played this game for: 4 days 14 hours 8 mins 27 secs? Well, actually I have played it for about 3 days longer that. My first profile got corrupted when I stupidly shut down my game on a saving screen. I was actually sort of happy I had to start over since I liked the game so much lol. But I am getting distracted. I need to get my ass and its short attention span back on track. Why the hell do I have such a boner for this game you want to know?

Some Funny Fucks Made This Game

Well, unlike Halo, Call of Duty, Ghost Recon, and all the other serious shooters out there Timesplitters: Future Perfect has a great sense of humor and never takes itself serious. It still has great First Person Shooter gameplay with all the violence, beheadings, and blood spraying everywhere you could want, but It manages to make you crack up while doing so.

For example: The game has monkeys! Lots of them. You can shoot monkeys in the game a lot. There is a ninja monkey. There is a robot monkey. There is a zombie monkey. You get to shoot them, in the face even, if you are feeling particularly cruel. If you still are not interested in this game then you have no soul. That halo monkey image above was made by the developers themselves to tease Timesplitters 4. But oh man don�t get me started on that since it looks like it will never be coming out now *Weeps in Corner*.

The game also has like 100 characters to choose from for multiplayer. They each have a unique phrase they will say when you pick them. They each have a little backstory you can read in the main menu too. There are zombies, a snowman, a duck, a dinosaur, a grizzly bear, a giant sock puppet, a handful of demented clowns, a gingerbread man, various robots, and tons of other crazy characters to choose from.

Another reason I have a hard on for this game is that the game�s color palette isn�t completely brown and grey. The developers of Timesplitters: Future Perfect had this nutty idea to actually make their levels and characters colorful. So many shooters like to make all their levels look like someone just smeared shit all over everything and blocked out all color. Not Timesplitters. Although a shit joke wouldn�t be out of place in the Timesplitters series lol.

One more reason I am stimulated by Timesplitters : Future Perfect. The game runs really smoothly. As in, the frame rate is constantly steady and animations look awesome for this reason. The game doesn�t turn into a slideshow when the action on screen picks up like so many other shooters.

Another thing about this game that makes my body all excite (<--Regie + Borat) is the fact that this game has creative and fun to use weapons. There are machines guns, pistols, and shotguns of course, but there are also tons of less generic weapons. There is a flare gun which shoots a flare. Shocking right, but it spirals out of the gun unpredictably and is hard to hit people with, but if you do it�s a one hit kill. You can also duel yield these. They are sort of like the games rocket launcher and are incredibly fun to use. Another neat weapon in the game is called the injector. If you shoot someone enough with it your opponent will start swelling up and their body will expand before your eyes until their gooey innards explode out through them and blood splatters all over the walls and ceiling. The nasty gory explosion can kill you if you stand in it too lol. Oh yea you can also just grab a brick and throw it at someone�s face, or you can pick up a baseball bat and just start wailing on people. It is soooo satisfying.

I haven�t even really talked about the singleplayer or multiplayer yet. There is just too much to fap over when it comes to Timesplitters: Future Perfect ! Well the single player is humorous and fun and it has you jumping through tons of different time periods, hence the name of the game. This is great for the gameplay because it means you are constantly tossed into radically different environments, using completely different weapons, and fighting totally different enemies. The single player campaign can also be played with split screen co-op. The single player is quite fun, but it is not the highlight of the game.

Now for the multiplayer. Oh how I love this game�s multiplayer. It is like Goldeneye 007/Perfect Dark and modern shooters had a super awesome cool baby that likes beating the crap out of monkeys.

Deal with it monkeys.

The Timesplitters series is known for its great multiplayer and it�s worth buying Timesplitters: Future Perfect for it alone. The multiplayer is super fast paced. Your character moves fast, you instantly respawn and are back in the action. There is no silly irritating 15 second respawn timer to punish you for dying. You immediately are returned into the game and are free to seek out revenge on the jerk who previously terminated your video game life.

The multiplayer is great too because it is insanely customizable. You can make your own weapon sets. You can put in powerups. You can turn on character abilities if you like so each character has special qualities. The multiplayer has tons of game modes as well. Deathmatch is the most fun in my opinon, but they have many more to choose from. Some of the more creative ones are Shrink, Virus, and Monkey Assistant. In shrink your actual character size is determined by how well you are currently doing. If you are in first place your character is full size. If you are in last place you are a teeny tiny midget that is very hard to hit. It is pretty funny. In Virus one person starts off infected and tries to just touch other people to infect them too. The last person in the game who isn�t infected wins. It is pretty terrifying when a horde of infected foes is running at you. Monkey Assistant is sort of like Shrink in that it aids struggling players. In this mode though it lets the person in last place gain an entourage of violent homicidal monkeys who lash out any one who dares to come near their new buddy.

The game also had an online mode. Which I heard was amazing. Unfortunately this game was published by the evil company Electronic Arts who like to pull down online servers for games after 2 days.

The servers were shutdown in 2007, just 2 years after the game came out. Luckily, the game also has bots for offline and split screen multiplayer and they are very customizable as well. I have spent many hours just playing against the bots. All hope for playing the game online was not lost once Electronic Asshats (EA) shut down the game�s online servers though, since Free Radical included a LAN mode. Through free LAN tunneling programs like Xlink Kai which you run on your PC, you can still play this game online. I do so about once a week with other people from: http://www.ps2onlinegaming.com

Other Awesomeness Found In The Game

Errrmm, so what I am forgetting. Oh yea, is multiplayer not your thing? Well included in the game are tons of challenges and an arcade league mode. If you are into game types where you try to best your high score, you will love this. You get rewarded with trophies which unlock new characters, cheats, and other goodies for you by doing this. That is just icing on the fucking awesome cake since these modes are ridiculously fun by themselves. You can race cats for example. You can fight a never ending horde of undead monkeys. You can break all the plates and windows in a Chinese restaurant. They pretty much came up with everything.

ARGGGGGGGGGGGGG. This blog is getting soo long. I can�t help it though. There is too much about this game that�s awesome and the gospel of Timesplitting must be preached to you gamers! Here is a nice relaxing picture of a to give you a break from my blog.

Don�t Give Me That Look! I Didn�t Make That Image!

Alright Bert, calm the fuck down. No need to slaughter me and feast on my brain like you did to Ernie last night. I will get back to Timesplitters talk.

Ok, So before Bert unleashes his puppet rage at me I will talk about the Mapmaker in Timesplitters: Future Perfect. It is a little awesome thing in the game that lets you design your own multiplayer maps. You can also create your own story levels. Like, you can create your own freaking game basically. The tools allowed in this Mapmaker are somewhat basic, but you can create really crazy cool stuff with it. People like this level creator so much that they are still messing around with it and coming up with new cool junk with it. A forum is setup for advocates of this feature of the game. Go here if you are interested in learning how to get the most out of the Mapmaker feature of the game and want to try out other people�s creations: http://s7.zetaboards.com/Rec_Room/forum/9680/

I have made a few multiplayer maps and story levels myself. If my whoring out of them didn�t make you disgusted you can check them out here: http://www.youtube.com/user/Lazyhoboguy#g/c/E3655BA31343C558

I am sure I am still leaving out some stuff about how ridiculously amazing and replayable this game is, but this blog has to come to end sometime and that time is now. I may have posted this in an old blog before but I cannot remember. Anyways, I shall leave you with this video of me turning a monkey into a terrorist in Timesplitters: Future Perfect. Enjoy.

My main hobby is playing video games so most of my blogs will be about them.

Here is a list of just my online video games:

I also am active in playing PS2 and Xbox 1 games through LAN tunneling. I play games that have had their online servers taken down. A program called xlink kai
(https://www.teamxlink.co.uk/) allows ps2 and xbox games with a LAN option to be played online still. Timesplitters Future Perfect on PS2 is the game I play the most through this method.


If you want to plan game with other Playstation 2 online players and Playstation 2 LAN tunnelers (using Xlink Kai) check out this site:

My nicknames for other stuff