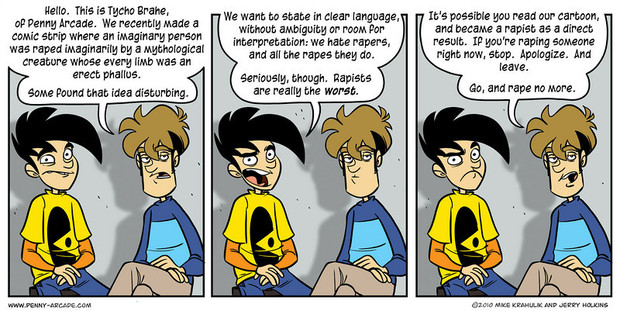 You would imagine that months later, this disgusted feeling would have faded, but apparently it has not. "This company doesn’t represent me or the type of culture I want to work in or create for," Stanton finishes saying in her blog from January 24th of this year. The blog post was then bumped on the 26th with a thank you letter to her readers:

" That link originally pointed at the page where one could buy a Dickwolves t-shirt. That t-shirt is no longer for sale on Penny Arcade. Even if Mike and Jerry don’t want to acknowledge it (the shirt appears to have been removed without comment), it deserves to be acknowledged. Thank you, guys. Thank you for listening to whoever you listened to, and thank you to whoever that was who spoke up and managed to convey what I, and a lot of others, have been trying to convey for months. Thank you, thank you, thank you."

While I do not find rape to be a funny topic, I stand on Gabe and Tycho's side when they say supporting rape was never their intention.Neither comic nor the shirt glorified rape or try to imprint the idea that rape is a good thing into their readers' minds. It is not as if the shirt features a wolf holding down a girl and raping her with the words "This is fun!" written on it, nor does it have a picture of an alluring attractive, naked woman laying unconscious on it. Women are not sexualized or targeted in any way by this shirt; there is nothing on it other than the word and a picture of a wolf head. If anything, the average person would not understand the shirt since only those who read the comic would understand the reference. The average person is not going to look at the word "Dickwolf" and automatically think they need to rape someone. Due to this, I see no reason as to why the shirt needed to be removed but I admire their decision to do the "right thing" to please their audience.

There is still no official explanation was to why the shirt has been pulled from the market, but as this story continues to unfold, I will keep you updated.

Updated Jan. 28, 2011: The controversy regarding the shirt's ban has been spreading. A blogger by the name of TheFremen has shared his opinion. He seems to be offended by the fact the shirt was quietly removed from the site without any proper statement from Penny Arcade.

"...the end effect is the inane design which dog whistles “I support rapists” was made unavailable for purchase without them actually saying (free of sarcasm) that they give a fuck about rape survivors/victims or feel the need to make survivors/victims feel safe at their con," he strongly writes.

I know that I would still like to know what is about the shirt that screams, "I'm a rape supporter!" I have been trying to get points of view from both parties and search for an answer to this burning question. I have sent an email to Tycho, tried contacting Kirbybits, and also recently tried to post on TheFremen's blog. I have yet to receive any response from Tycho nor has my post been approved for either Kirbybits' or TheFremen's blogs. If and when someone finally decides to share their side, I will be sure to update again.
#Community    #Industryevents
Login to vote this up!