Allow me to beat this dead horse for you.

2:58 PM on 01.25.2011 (server time)    0
As you guys know, I�m not super-excited for Bulletstorm. I never planned on talking about it this much, exactly, because I typically try to avoid focusing on things that I don�t find super-fascinating. However, the amount of rabble-rousing I accomplished with my now semi-infamous �Cliffy B rant� has led to me being that guy who hates Bulletstorm with a furious passion, thinks violent games are for antisocial man-children, and feels that all games should be more like Stars Over Half-Moon Bay.

This is not the case. I love mindless virtual killing and childish antics in a video game. In my life, I�ve probably completed about six missions in all of the Grand Theft Auto series, because I spend the majority of my time in those games punching old women and blowing up cars. I can appreciate innovative gameplay and the importance of a good story, too, but I think it�s funny to shoot dudes in the face.

I also appreciate humor in games. I think it�s one of the big elements that�s been left out. You ask people about games that are known for their comedy, they�ll probably say Conker�s Bad Fur Day or Portal. Try and name ten games that you�d say are, without hesitation, funny games. It�s kinda tricky.

Bulletstorm is being played up as a ridiculous, over-the-top shooter that encourages creative gunplay and doesn�t take itself too seriously. It�s a game where you can shoot a man in the crotch, get bonus points for that, and then use an electric whip to punt him into a giant venus fly trap.

Why wouldn�t I be excited for it? Well, aside from the fact that I don�t like Cliffy B�s haircut -- I know it's not his game, but he's the one plugging it. That's the downside of having a hype-man, people tend to associate him with the cause he's promoting. Dude, you're getting a Dell! -- Anyway, Bulletstorm seems muddled. To call it over-ambitious isn�t quite right, but it seems like a game that�s attempting too many different things at once. Here�s the premise, according to Wikipedia:

�Bulletstorm takes place in a futuristic paradise setting where a confederation is being protected by an elite band of epic mercenaries known as Dead Echo. When Dead Echo member Grayson Hunt, voiced by Steve Blum, and Ishi Sato discover that they had been working on the wrong side, they betray their squad commander and end up being exiled to the edges of the galaxy.�

Okay, so. It�s about space guys in a universe that�s totally new to us. We�ve got a new hero named Grayson Hunt. This could all be very promising science fiction. Oh, but wait. Nevermind that. The reason I�m supposed to be excited for the game is the crazy shit you can do with your guns and laser-lasso and giant boots. 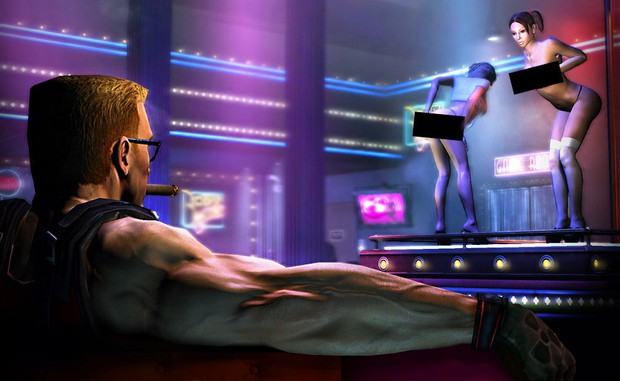