1:47 PM on 01.23.2011 (server time)    0
Dag yo! So, welcome to my first catch-up edition of A Compulsive Collector’s Haul! I’m trying to fire off at least one of these each week, if not two, so be prepared for a number of these blogs that show off what I’ve collected over the past 5 month (well, from the beginning of September), from various places. For this edition, we have stuff from the best store in the world, Cash Converters, some real gems from a Shmup Forum that our very own BulletMagnet is a moderator of, a number of strategy guides, plus some trades I’ve made with other Dtoiders over the last little while. I’m also going to make a separate post with all the hardware/consoles I’ve gotten over the past 5 months as well, and most of it has come from the super kickass Cash Converters. Prepare for some awesome and for some stuff you just couldn’t imagine that people would want to get rid of! Before that though, continuing with a mini-tradition . . .

Did you know that you guys are ALL ignorant and stupid! I mean, I’m the only one in the world who likes video games and keeps up with current events. Therefore, I feel it is my duty to FORCE all of you to see the world the way I see it, and if you disagree with me or criticize me in anyway, I will just make up some very poor halfass excuse to weasel my way out of the situation and blame you for not “understanding” my “superior” views and enlightenment I’m trying to pass on! If you do somehow manage to serve me up a heaping slice of humble pie, I’ll simply ignore it and trash other people I think I’ll be able to win an “internet” argument against! ^_^ On with the show! 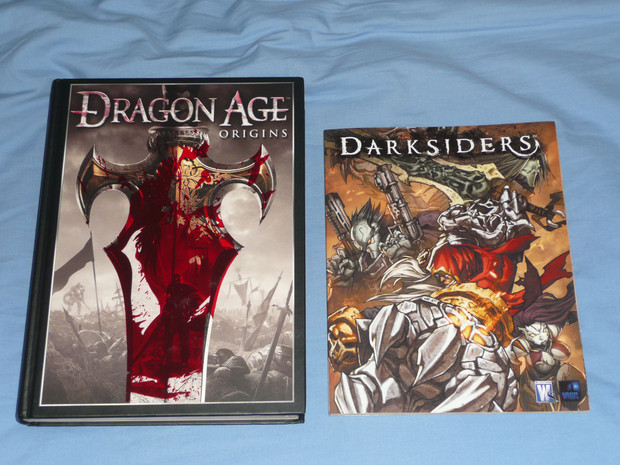 Finally, we end this haul with a Dragon Age: Origins Guide – Collector’s Edition and a [i]Darksiders[i]: The Graphic Adventure art book-like thing.

That does it for this haul. I decided to separate the hardware stuff that I’ve gotten from Cash Converters over the past 5 months, because I got a fair amount of it and it really is that awesome to deserve its own post. Japan pictures are on the way, but sorting like over 2,000 pictures is taking just a little bit longer than expected. That said, I’ll take a mini-poll again for those of you who read this, should the next edition be a “New Game” edition? A “Swag” edition? Or a “Poster/Miscellaneous” edition? The next one definitely can’t be a hardware one, since I still have to catalog a couple things. Regardless, thanks for stopping by and until next time, latez mates!
#Community
Login to vote this up!