1:03 PM on 01.22.2011 (server time)    0
I recently had the chance to try the semi-recently released Final Fantasy VIII on PlayStation Network. I wouldn�t call it a stretch to claim that VIII is one of the most polarizing games ever released. Some people love it, others despise it, and debates rage on Internet forums. It�s a strange experience for me because back in 2001 I never actually finished Final Fantasy VIII because of a bug with the PC version that I had.

My opinion hasn�t changed too much from then, so let me say it right now: Get out while you can, Final Fantasy VIII fans. This is going to hurt. Despite that, there�s something very appealing about it in hindsight very fitting with why I started this blog in the first place.

Final Fantasy VIII falls into a very unfortunate spot of the video game ven diagram. It came out in the early days of full 3D and used what were the best technical graphics at the time. From today�s perspective that would be like comparing Windows 7 to Windows 97. I don�t fault the game for having limited technology but the simple fact is that Final Fantasy VIII has aged atrociously. Early experimental full 3D always looks messy, up to and including classics like Mario 64. In Final Fantasy VIII the character models now look like they�ve been fed through a threshing machine and the entire world map looks like a poor draw distance of far-off scenery. Area environments look much nicer, but it creates this bizarre contrast where you have human-shaped smears appearing next to detailed background environments.

There�s a lot to complain about Final Fantasy VIII (and don�t worry, I�ll get to it) but by now you�re probably wondering what a video game renaissance has to do with this game. Despite how primitive VIII is by today�s standards it had a huge amount of content relative to Final Fantasy XIII. Final Fantasy XIII looks absolutely unbelievable and may very well still be very pretty ten years from now but it�s incredibly linear. VIII starts off as linear as JRPGs tend to do but opens up to offer free roaming of a fairly large world. This lends itself to a lot of available content including the Triple Triad Card Queen, the Deep Sea Research Center and Centra Ruins to get secret Guardian Forces, rare items from the Chocobo Forests, magazines for upgraded weapons, and on and on. In fairness a lot of this content isn�t really implemented that well but it�s still very substantial for a game from 1999 when you compare it to Final Fantasy XIII eleven years later. 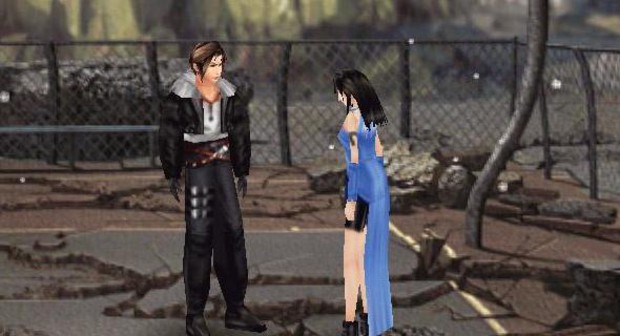 When Final Fantasy VIII finally relents and lets you play it, combat is even more problematic. Contrary to what JRPG purists will argue the only reason random encounters even existed was to save space on maps. They�re archaic, intrusive, and and especially annoying when you�re trying to solve a puzzle or explore a new environment. You�ll also need to walk around because you get paid by a �salary� every so often because monsters don�t drop money. Admittedly after a few hours all the walking you�ll need to do will have more money piling up than you can possibly spend.

The turn based combat is gluey and battles start to take absurdly long time owing to the mechanics. You need to spend tedious time �drawing� magic from enemies in order to use it to boost your stats. Normally this would make using magic counterproductive but magic is about as useful as the handgun in the original Wolfenstein so two bad design problems cancel each other out. Your primary method of attack will be summon spells or GFs, which last an absurdly long time and in order to increase their damage you need to mash a button during the sequence. It�s a completely static system with the exception of hammering a single button.

Magic, on the other hand, is primarily used for the Junctioning system. You connect magic to stats to increase them, so for sake of example you would want to attach Cure spells to your HP stat to provide the biggest boost. In theory this should suggest a litany of combinations of different junctions but all you�ll ever wind up doing is equipping the same stack of magic with the most output for your strength or magic on all six characters. It�s just number-crunching accounting work and the fact that RPGs are becoming less number-driven show how outdated this trend is becoming.

As for battle, if you don�t feel like watching the same summon animations over and over again you can let your health fall into critical condition in order to access your limit breaks. These are a lot faster but some of the best spells are randomly triggered and it shoots any sense of strategy in the foot.

After the success of Final Fantasy VII briefly brought the entire world to a halt Squaresoft seemed very intent on dissecting the formula and reworking it as much as possible to see what else they could come up with. That�s what VIII ultimately feels like. It�s more of an experiment than a game that set out with a clear mission objective and it fiddles with a lot of gameplay mechanics that just don�t work.

Final Fantasy VIII is a great object lesson in what ideas to take from game generations of the past. Ours is a very technology-driven medium and it�s easy to just make a blanket proclamation that Final Fantasy VIII hasn�t aged well. Visually it certainly hasn�t, but the design ideas behind it are something we can learn a lot from, especially since the technology of 1999 wasn�t nearly the money-consuming black hole that today�s AAA games use.
#Community    #Rants
Login to vote this up!