8:18 AM on 01.20.2011 (server time)    0
Hey buddy, don't mean to call you out or anything but you called me, yesterday "a lying ass bitch" because I was saying my Black ops games on Xbox LIVE suffer from many connection issues.

I was gonna leave it, but then today, in my lunchbreak I played 2 rounds of Black ops, no more, no less, well, a little less because looky what popped up (after the little unplugged cable logo) about 2 minutes into round number two.... 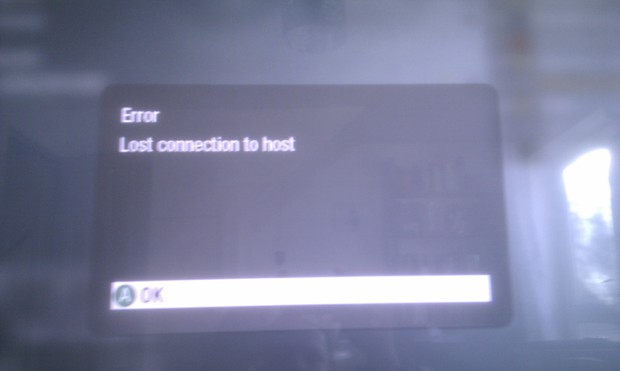 Now I know the picture doesn't show much, but I kinda had to grab my phone and take it from my gaming chair position quickly but, this was honest to God on LIVE and within 15 minutes of starting my game session.

That's right mate, XBL is "buttery" 100% of the time. If butter has trouble staying connected to the servers/host of what is currently it's most popular game, and cost Ł40 a year.

(In fact, due to it's nature, butter probably would have a bit of trouble staying connected to just about anything, except bread, it's good with bread)

I'm gonna have to start taking shots of all of these, i get a variation of 3 different problems pretty much on daily basis (not including the occasional: "The Matchmaking Servers for the P2P game you paid for on the online gaming network you pay for, are currently unavailable") - and as I've said before, this is far more understandable and acceptable when you're not paying Ł40 to get disconnected.


*Just FYI, I run my PS3, PC, Mac, Xbox, PSP, and Mrs SC's DSi XL through the same 50mb/s fibre optic cable broadband and ISP supplied wirelss router - and I have more problems with Xbox LIVE than any other platform. Funny, being as though it's the ONLY ONE I have to pay a subscription for*
#Community    #Xbox360
Login to vote this up!

Father to a beautiful little boy, Vinnie. And husband to a gorgeous woman called Rowan, or "Mrs SC" to you guys. ;)

Prima Tiger for the SVER PMC - Fighting for a SVER victory in the Shadow War.
^That is a lie, I now fight for Raven, for FNF reasons^

Sony supporter in this sport we call a "console war."