In defence of Mass Effect 2 (not that it needs it)

11:06 AM on 01.19.2011 (server time)    0
After reading a bunch of 2010 Game Of The Year lists, one thing was clear; people really enjoyed Mass Effect 2 (I was one of them), but there was one thing that stuck out amidst the praise. There were numerous comments complaining that Mass Effect 2 should not have been so highly regarded, because it wasn�t actually an RPG, it was merely a shooter. This seems like an odd notion, as I can�t figure whether or not the complaints are about the game�s mechanics not being the same as the first Mass Effect, or if it�s more to do with the game wasn�t �RPG enough� to be called one. 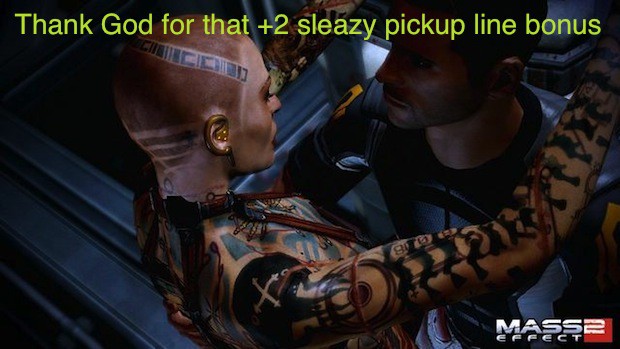 Lastly, the inventory: almost completely done away with. I can�t speak for everyone, but each time I played Mass Effect I ended up with a huge amount of equipment which I hardly used. Selling it all unlocked the Spectre gear which was the best in the game and made almost all the other gear worthless. ME2 got rid of the inventory and focused the game more; I spent less time selling stuff (and trying to remember who needed what) and more time actually playing. There were plenty of other changes, but these three are the RPG elements that I think have been singled out as the things that changed in the sequel which was to Mass Effect 2�s detriment.

Whilst it�s completely understandable why people didn�t like the changes, I have to look at what I liked about Mass Effect and why the changes didn�t alienate me from Mass Effect 2. With the original Mass Effect I enjoyed the story, the characters and the universe that Bioware built. When it came to the sequel, I would have accepted more of the same when it came to the gameplay. Yes, even the Mako sequences which never really bothered me that much. All I was really expecting was a continuation of the Mass Effect story and hopefully new characters and settings to enjoy. What I got were fundamental changes to the gameplay mechanics which I felt improved the Mass Effect franchise considerably.

So, is Mass Effect 2 an RPG or not? It depends what you look for in an RPG; if you�re looking for stats, inventory and dice rolls in the background to determine your effectiveness. If that�s the case, I can see why Mass Effect 2 is disappointing. If, like me, you play an RPG because of it�s characters and the world you�re in, and the way you make your mark on both of them, then Mass Effect 2 is a great game. But if you said to me �I don�t like Mass Effect 2, it�s more of a shooter than an RPG and it got rid of the stuff I liked from the first� then that�s fine, I get it. Mass Effect 2 is not perfect by any means, there�s still things I�d like to see improved in ME3.

But it seems like we�re at a point where there�s a feeling that a game can be diminished or embellished (although it�s normally the former) on how we put that game in a genre or our own ideas of what it should be. Is it an RPG or is it a shooter? Is it a �Hollywood videogame� (something like Uncharted) or is it a �game-game� (something like Super Meat Boy). In the end, I feel like we�re trying to almost talk ourselves out of actually enjoying videogames or admitting how much we like them. We�re letting nomenclature dictate our thoughts on a game, instead of just letting the game�s strenghts and weaknesses inform our views. If you don�t like a game, that�s fine, nothing wrong with that. If you don�t like a game because of the controls, story or something else, then again, that�s perfectly fine. If you don�t like a game because it�s been called and RPG and you don�t think it is, then does it really matter?
#Community    #Rants
Login to vote this up!