8:09 PM on 01.17.2011 (server time)    0
The verdict: Raving Rabbids: Travel in Time is a wasted opportunity after the promising Rabbids Go Home and does nothing that noteworthy.

This may seem like a curious choice of review since it can be argued that Rayman and the Rabbids are long past their prime, so let me elaborate a little. Ever since the Rabbids - Rayman's antagonistic enemies - took center stage on the Wii, they've been part of a slew of generally forgettable party games that do nothing to stand out from the eighteen million party games on the Wii. Then came Rabbids Go Home which vastly exceeded my expectations by being an imaginative, humorous, and surprisingly fun platformer. It didn't come within throwing distance of a top tier game like Super Mario Galaxy but it was miles ahead of the Rabbids party games. So ever since then I've decided to keep a closer eye on Ren and Stimpy's deformed rabbit cousins. Raving Rabbids: Travel in Time returns the series to its party roots, which isn�t a step backwards so much as tripping over its heel.

Travel in Time is a party-themed game, meaning there�s understandably little emphasis on plot but the game can�t seem to convey even the basic premise that well. The appeal of this series has always been how crazed and overly kinetic the Rabbids are, and what worked about Rabbids Go Home was that emphasizing a plot (or as much of a plot that can be had with crazed rabbit creatures) let the story be expressive with almost no dialogue. In Travel in Time a long, uninteractive, unskippable cutscene details how those wacky Rabbids use a time machine in the shape of a washing machine to completely screw up history. While Rabbids Go Home gave you a sense of causing mindless destruction throughout the world in Travel in Time it�s almost purely through cutscenes.

The game�s presentation deserves some credit because the time travel theme is explored in much greater detail than a few token time periods. Instead the mini-games take you through a diverse and colorful series of historical contexts and events including the American old west, the Titanic striking the iceberg, the Mona Lisa and inventing the lightbulb among others. You have the option of either setting history back on track during the mini-games or screwing it up even more, the latter of which is really funny. The problem is that after you�re given the setting and general story the game never really seems to know what to do with the actual narrative. I�m not expecting great art but I spent most of the game in trance, mindlessly progressing from one game to the next. 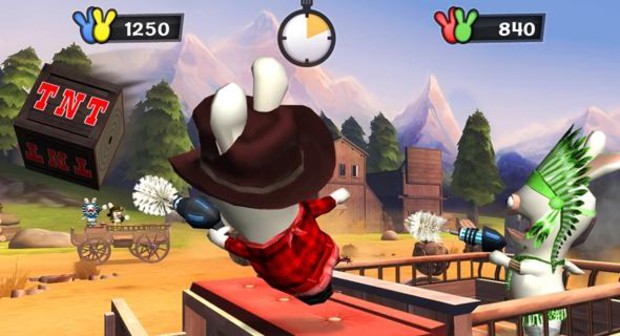 The Runarium and Hookarium are less substantial but also very average. The Runarium features on-foot races and the Hookarium features a few threadbare fishing mini-games. The controls for the Hookarium are functional but it�s the only game that requires the Wii MotionPlus, which seems a little arbitrary. Couldn�t the MotionPlus have been used to implement smoother motion controls in all of the mini-games rather than just the three related to fishing? All in there�s a scant 30 mini-games and none of them are that exciting. They�re brief but somehow still feel padded to extend the replay value. The thrill of racing an opponent or shooting rocks in midair was long over for me before the event round was even finished.

It�s also easy to see that the technical limitations of the Wii are pushed a little too strenuously in Travel in Time. Load screens are frequent are fairly lengthy, which is something almost disguised by the ability to move your Rabbid around in your confined time travel washing machine. I�m about ten feet from my TV and I could audibly hear the Wii disc practically straining with the effort to render everything in Travel in Time. The game itself generally runs fine but I got the sense that the Wii was gasping with the effort of keeping up.

Raving Rabbids: Travel in Time is probably one of my biggest disappointments of 2010. It�s definitely not the worst game I played � Kane and Lynch 2 still overwhelmingly holds that title � but with Rabbids Go Home I saw real potential in the Rabbids series. Unfortunately the decision to revert to formulaic party games with Travel in Time feels like a big setback, and what�s left is a dull, sparse party game.
#Community    #reviews
Login to vote this up!