5:29 PM on 01.16.2011 (server time)    0
The verdict: Castlevania: Lords of Shadow generally works but has to constantly compete with the games that do combat, platforming, and giant boss battles better.

Castlevania is one of the many franchises from the old 2D days that never adapted to 3D that well. After an appallingly bad start 3D Castlevania seemed to dribble away with the mediocre at best Lament of Innocence on the PlayStation 2 while the series found a much more comfortable home on Nintendo handhelds. MercurySteam�s reboot draws heavily from other successful 3D formulas to help Lords of Shadow stand on its feet, and while Lords of Shadow is adequate it feels thin and unsatisfying relative to the depth of the games it emulates.

Castlevania: Lords of Shadow is not part of past series canon but humanity is just as screwed here as it is in the �other� series. It�s the year 1047 and a sinister spell has prevented the souls of the dead from passing on. Gabriel Belmont is a member of a holy brotherhood of knights who protect the innocent from dark creatures that roam earth because humanity�s alliance with Heaven has been strained. As Gabriel investigates the spell that keeps souls trapped in limbo he discovers the power the God Mask can resurrect the dead. Gabriel sets out to defeat the Lords of Shadow to obtain the mask pieces and resurrect his deceased wife, Maria. 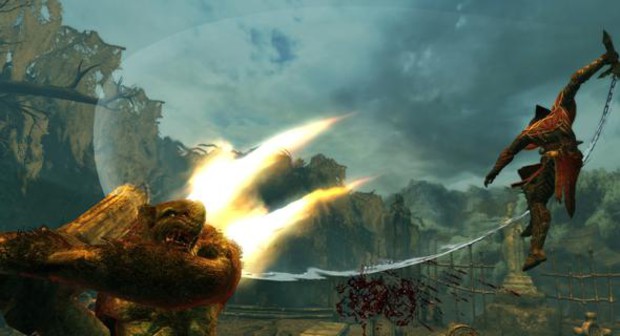 The saving grace is the presentation and orchestral soundtrack. These days saying a game on the 360 and PS3 looks very attractive is more redundant than accusing 3D Realms of slacking off but Lords of Shadow does offer a lot of eye candy. As generic as I found the first giant monster battle, the snowy blizzard and the intense music that went with it did a lot to liven up crawling across the big guy stopping every ten seconds to hold onto his�hair? Fur? Whatever. The only problem, again, is that the confusing level design can obscure main pathways. Voice talent is generally on the �meh� side, but what shocked me was looking up the cast and discovering that Sir Patrick Stewart, who did such a solid job in Oblivion, sounds snore-worthy as Zobek.

Let me restate that Lords of Shadow isn�t an outright bad game. It does a fairly good job of taking existing concepts and meshing them together into something playable but each component can�t individually stack up to a counterpart game. In the end Lords of Shadow is adequate, but lacking. It looks very nice and it plays decently but its only noteworthy feature is the brand power of the Castlevania name. In the end its value is mostly a time sink for third person action fans. Having said that, I�m still curious to see where the confirmed sequel will be going. By all means experiment, MercurySteam, and don�t be afraid to try fiddling with existing concepts.
#Community
Login to vote this up!