4:38 PM on 01.15.2011 (server time)    0
Let's face it: Clich�s drive media. Writing a good story alone lends itself to a slew of clich�s to resort to. Just as filmmakers deal with the clich�s specific to the process of filmmaking, there are a slew of them wholly associated with the process of game design and development. As we look back on the 2000s it helps to take a look at some of the burgeoning clich�s that have emerged in video gaming. With a whole new decade upon us, we'll surely look back on them and smile as we develop new ones.

People who regularly play modern shooters are almost conditioned to expect this by now. You and your teammates have blasted through the last pockets of Russians and Arabs, your noisy commanding field officer is radioing in for evac, and all is well�or is it? Suddenly a helicopter zooms in for a surprise attack, the rotating blades apparently having been on silent mode until now. Your CO screams �CHOPPER! Private, take it down, I�m too busy trying to look useful here!� Thankfully Russian extremists and terrorist cells have curious habits of ambushing you with helicopters directly on top of stacks of rocket launchers and ammunition. 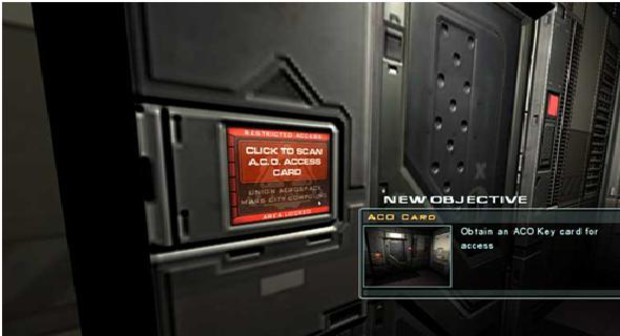 New rule: Galaxy-wide ban on ships that use keycards for locked doors.

BioShock is beyond a doubt the most recent showcase of this. Virtually every in-game objective is as deceptively simple as walking through a door or pushing a few buttons. Rapture evidently operates as much under Murphy�s law as it does Ayn Rand because every single time you�re given an objective like this the universe momentarily conspires against you and you have to go through a much longer, treacherous area.

Why it became a clich�

It wouldn�t make sense to for us to successfully teleport to Black Mesa East or go through a few corridors to stop the antagonist in Rapture. That would be boring. It�s much more logical for us to have a reason to take the more treacherous road, but how many ceilings can collapse before we need something new?

It started with: This one is way too ubiquitous to even begin to lock down a starting point, but Half-Life 2 comes to mind. Alyx was safely through the collapsed roof while we had to go through jumping puzzle jamboree Ravenholme.
Login to vote this up!