When Sonic Adventure came out on the Xbox Live Arcade a few months ago, I recommended it to one of my friends. He said something to the effect of "Hey, is this the one with City Escape?"

When I said no, he gave me a kind of disappointed sigh and said "Tell me when THAT one comes out. That was my favorite." I couldn't help but launch into a rant about my problems with Sonic Adventure 2. My friend then said "Dude. City Escape." I had to concede that argument, because he had clearly won.

But really, ever since the announcement of that Dreamcast Collection and the release of Sonic Colors, there's been a weird hype resurgence for Sonic Adventure 2: Battle on the internet. Reviewers of Sonic Adventure's recent digital re-release always state they are waiting for the release of SA1's superior sequel, and a TON of internet topics full of backlash against Sonic Colors reviews have popped up because how dare anyone suggest that it has surpassed Sonic Adventure 2: Battle?

(Note that I will be using the "Battle" suffix throughout this article because I was not familiar with the Dreamcast version. And neither were like 90% of the people I know. No one had a Dreamcast.)

Sonic Adventure 2: Battle was a pretty huge part of my early gaming career. And mid gaming career. It was one of the first Gamecube games I owned and I played it for years. I even played through some of the multiplayer modes, which were, in hindsight, kinda terribly designed. Like the race modes where you could basically spam powerups and stunlock your opponent for the entire race.

Still, I played the game loads. And when I was recently given an opportunity to replay it (on a Gamecube! With a grey Wavebird!) I definitely took advantage of it. There is a definite nostalgia filter for games I played when I was growing up, but for some reason I wasn't really feeling SA2 that much this time around. The Sonic and Shadow levels? Fantastic. Some of the best 3D platforming in the series. The issue here is that Sonic/Shadow are maybe 30% of the game.

One big chunk of the game is sitting in a mech walker and blowing things up. I could talk in length about what is wrong with TAILS sitting in a mech walker and blowing things up, but I'll keep it simple. 99% of these stages are designed terribly. The main objective of them is "go into a small room, blow everything up, repeat." That is bad game design! "Kill all the enemies" sections are admittedly tough to avoid in games (even the excellent Sonic Rush had bits of this) but it should never be the ONLY objective ever. There was some platforming involved, but heavy, slow mech walkers = not very fun platforming. At least Eggman's random Japanese speech was funny.

Another big chunk of the game is treasure hunting. It's a leftover from Sonic Adventure 1, where Knuckles had to gather pieces of the Master Emerald. There's a completely contrived plot point that means the emerald breaks AGAIN and you have to hunt for pieces throughout the game.
The treasure hunting levels in Sonic Adventure 1 were fine, even quite enjoyable. So Sonic Team being Sonic Team, they had to take something good and break it.

The radar now only shows one Emerald at a time, regardless of how close you are to the others.
The radar in Sonic Adventure 1 could show any Emerald shard if you were close to it.

This leads to several situations of backtracking and standing very close to an Emerald but not knowing it because it was the "third" shard and you haven't "unlocked" it on the radar yet. Why? Why did they change the radar from Sonic Adventure 1, which works perfectly fine? Why are the levels so big, and get even bigger (and less enjoyable) as the game progresses? Just...why? 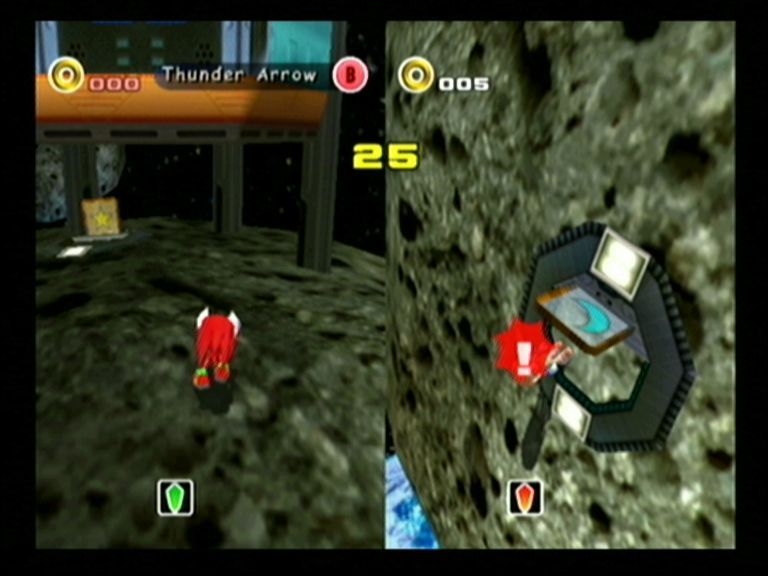 It's ya main man Knuckles, and we're in Broken Radar Zone!

I still say the only thing that kept me from straight up quitting during my recent SA2:B playthrough was the music, which was pretty rad. It's a shame that Sonic Team's composers seemed to abandon brass instruments for a LONG time after this game. Sonic Adventure 2: Battle had a good mix of several musical genres and some sweet, sweet horns. If you can't tell, I love horns. Especially jazzy trumpets.


On a more positive note, the story in this game still holds up quite well. It's dramatic at points but not in an overly contrived way. Shadow the Hedgehog is probably the only character in the series with an established backstory and a mostly well-written character arc that spans several games. He got majorly derailed after Sonic Adventure 2, but I still think his story is well done in this game. And his voice actor was the best here and they will never get a good replacement for David Humphrey. Ever.

Did anyone else see a bad recolor of me go by?

I have no issue with having loads of characters in a Sonic game if they are all fun to play. Sonic Adventure 2: Battle has two fun characters and four that are a chore to play as. So while I'll probably be putting Sonic Adventure 2: Battle back into my collection soon via XBLA and the Dreamcast compilation, I'm just biding my time to unlock Level Select so I can just play as much Sonic and Shadow as I want.

Sonic Adventure 2: Battle is not the best 3D Sonic game. But I will admit, it's still a fun game under a few conditions. Those conditions are "unlock Sonic and Shadow stages for level select and never play anything else besides that. Besides maybe a little bit of multiplayer. Chao Garden's cool too."