I found out over the past couple days that Dragon Age would be getting another slew of DLC on launch. Some of it you get by preordering at participating retailers (there hasn't been a list of who those retailers are so far as I know) and some you get for simply buying the game new. I really like day one DLC that the player can get at no extra cost. A lot of the time, the DLC in question is something cool like the cupid themed guitar that came with Brutal Legend or just a nice looking piece of armor or a mid-tier weapon. The items being given away with Dragon Age, however, caught my eye because Bioware specifically said that they are epic-tier weapons and items. In other words, they should rank as some of the most powerful items in the game. At first, I was excited at the prospect of being given epic items just for buying the game new. After some thought, however, I wondered whether I was getting juked or not. If a game maker creates content that is meant to be a "bonus" on release date, is it really a bonus at all? Shouldn't it have been on the disc? How are we, as consumers, supposed to tell when we are being given content that really does count as a bonus or content that was just set aside to be used as DLC?

The way I see it, bonus content can be considered as a bonus when their absence from the game does not create any kind of hole in the gameplay or plot and can only be counted as a bonus if they offer something unique that adds to gameplay or plot. So, for example, let's use Shale who was a bonus character for those who bought Dragon Age: Origins new. Shale's questlines are all about digging up his past and trying to find out how he got created. While the story is quite entertaining and emotionally charged, it's absence would not have a great impact on the main plot line. There would be no gaping holes in either the gameplay or the story if Shale was left out of the game. As such, I consider Shale to be a bonus. Now, let us look out the preorder DLC that is coming with Dragon Age 2. 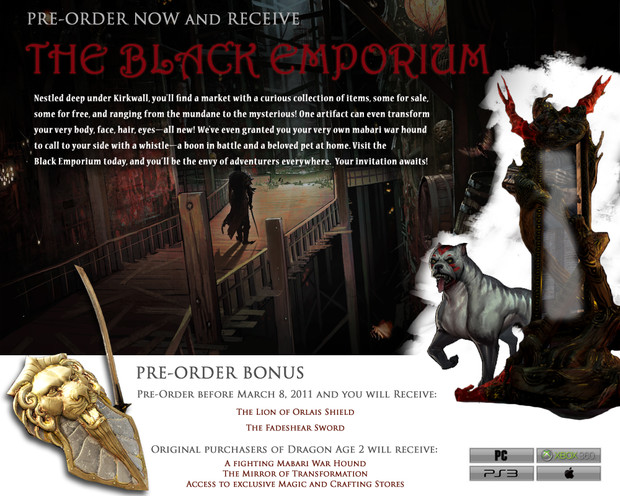 We get a hound, a mirror that let's our reset your faces, a sword and shield, and access to a shop full of high end weapons, armor, and gear. This shop also has quests and secrets attached to it. Which of these items/ places would create a dissonance if they were left out of the game? For me, it is the shop. It is one thing to include one or two good items with a game if you buy it new. It is another thing entirely to hold a shop full of end-game tier items separate to certain players. Gear is fundamental to many RPG's. They are what all those number and thrown dice revolve around. Better or worse gear can completely change a player's strategy by expanding or limiting what a player is capable of doing in the midst of battle. For these reasons, I feel that the Black Emporium shop should not have been used as a bonus but be included in all copies of the game.

Now, some people might say to me, "How does anything you are saying matter at all? Most of these bonuses are meant to deter people from buying the game second hand. There's nothing wrong with the game developers wanting to try and cut down on lost moneys due to companies like Gamestop or Play N Trade so quit your whining and buy the game new." I would respond that whoever said those words are completely correct and that I do plan to buy the game new. What concerns me is not that I must buy the game new and/ or preorder to gain bonus content. Rather, it is that companies like Bioware seem to be using more and more elaborate pieces of bonus DLC in their preorder programs. This concerns me because how are we, the consumers, supposed to know that this piece for bonus content is, indeed, a bonus? What separates content that is truly a bonus and content that was simply set aside to be used as DLC? I am asking the same questions that I asked at the beginning of this train of thought. The reason for that is because I really don't know how to answer these questions. While they aren't questions that keep me up at night, they do hint at a future of gaming that is heavily tied into preordering games and buying new copies not because you get cool bonus items, but rather, because you are afraid of missing out on something that others might have. That is sickening to me. I don't want to be motivated to preorder a game just to get a shiny sword. I want to be motivated to preorder a game because I truly want the game to succeed and want to do my part by preordering.

Imagine this. The Fire Flower! This flame imbued piece of floral wrath grants Mario the ability to hurl flames at his enemies. Decimate your foes from afar by preordering are your nearest *******.

Biggoron Sword! Gain access to an epic quest of delivery as you make your way across all of Hyrule in your quest for this powerful and unique blade. Only available through preorder.

What separates content between being a bonus and being something that should have already been on the disk? Can you finish the Mario without the fire flower? Yes. Is it right to withhold it just because you can? No. Same goes for the Biggoron Sword and the Mega Buster's charge. Will taking these items out of the game keep you from finishing the game? Obviously not. But that doesn't mean that they should be withheld as "bonus" content.
#Community    #Rants
Login to vote this up!