Well, go figure. It should happen that the first review I post of 2011 happens to be a very specific genre I�m completely unfamiliar with in terms of reviewing. I�ll resist the temptation to say �It�s pinball� and end there. That would actually be doing the game a disservice. Pinball FX 2 may not be a groundbreaking indie experience but it works beyond the material given to it with creative art design and a successful creation of what makes pinball fun.

Pinball FX 2 is free to download on Xbox Live, but the caveat is you don�t get the full package when you install the game. You can download maps individually or as part of packs, although if you have Pinball FX installed you need only import the Pinball FX Classic Collection tables (Speed Machine, Xtreme, Agents, and Buccaneer) to FX 2 rather than being forced to download them a second time. All in there are five individual tables and three table packs of four each including the Classic Collection if you don�t have Pinball FX on your 360 already.

On paper it�s easy to see how this system might be a method of using microtransactions to bleed us dry but Zen was at least thoughtful enough to offer us the download of the game itself for free. The Pinball FX2 Core Collection costs 800 Microsoft points and introduces four new maps: Secrets of the Deep, Biolab, Pasha, and Rome. This effectively makes the Pinball FX Core Collection tables $2.50 each and a solid bargain. Zen Studios also even lets you play the demos free of charge to decide whether or not you like them to plunk down the money. It almost feels like iTunes where you can trial and choose what tables you like rather than purchasing the entire package upfront in a good way. 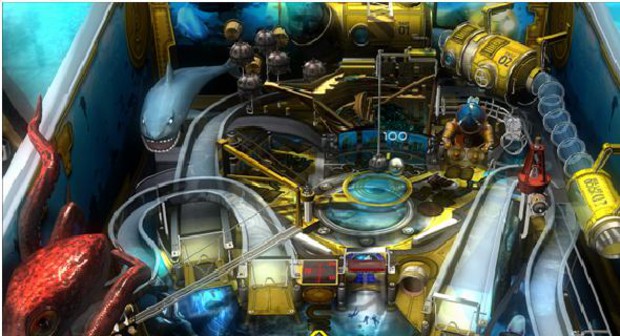 The experience can also be a little too disorienting. Sometimes you�ll be given a notification that you have the chance to trigger a jackpot like, say, saving secret agents on the Agents map from enemy hands, but you�ll have very little indication of how to do it and I always wound up randomly mashing the flippers hoping I hit my ball towards the target until my timer expired and the announcer called me a dunce. This is admittedly more of a problem with the concept of pinball than Pinball FX 2 itself but we could have at least had more direction in some situations.

There are a lot of little tweaks that make Pinball FX 2 more accessible. When you quit out of a current game you have the option of resuming that same game when you load up the table again rather than losing your nearly-new high score. You can only have one �save� file per table in this manner but it�s a great way to keep players interested. Another nice touch is that when you unpause the game counts down for three seconds to give you time to collect your bearings and figure out the trajectory of your pinball. Small design choices like this make Pinball FX 2 a much more user-friendly experience.

Pinball FX2 is also held up nicely by the additional content available if you want to play with friends. Splitscreen local multiplayer and online play are both available, and online play ran very smoothly. There are also thoughtful scores to measure your personal cumulative goal in Pinball FX 2 and also a score that measures you against your friends on tables. A real-life pinball table isn�t exactly conducive to multiplayer so Zen found another way to take advantage of the video game setting. Kudos.

A game like Pinball FX 2 may not have the publicity of Limbo or DeathSpank but you shouldn�t let it fall under your radar. Regardless of whether or not you played the first game, Zen Studios has delivered a thoughtful, creative pinball experience that actually winds up being a solid bargain for consumers. You can purchase one collection if you�re a layman or pick and choose your favorite themes if you�re a more dedicated pinball enthusiast. Either way, it�s difficult to not enjoy Pinball FX 2.
#Community
Login to vote this up!