5:37 PM on 01.09.2011 (server time)    0
As I�ve already touched upon, Mass Effect 2 was my game of the year. I literally jumped out of my chair in surprise when I saw trailer that officially unveiled Mass Effect 3 and nearly did it again when I realized we would be seeing it this year; far less time than it took for Mass Effect 2.

It would be easy to ramble for hours about the complex ethical and moral decisions in the game, the stellar voice acting, how I love the Illusive Man as a character but thwarted him at every turn and how Garrus is cool, it�s more productive to offer constructive thoughts on how Mass Effect 3 can be even better. As it stands BioWare has set the bar extremely high, so here are a few of the things I�m hopeful that BioWare will address. What I love about BioWare as a developer is that they always listen to player feedback.

As voice acting and writing becomes more and more sophisticated in video games, this is a problem exacerbated by high-definition graphics. When voices and physical movements are created separately it lends itself an awkward mannequin-like physical appearance that makes characters seem stiff and unreal periodically. It isn�t really a budget issue so much as an authenticity issue since it pops up in big budget releases like Fallout 3 all the time. I can�t propose a solution but I can hope that since a company like BioWare has a habit of honing their skills with each new product, we�ll get over this.

Some of you are probably going to be thinking �What? What�s wrong with the AI?� The allied AI in Mass Effect 2 isn�t the worst, but it shows its true colors on harder difficulty settings. When you rely more heavily on your allies due to harder enemies, you�ll notice that they throw themselves into suicidal situations, crouch directly in the open, and periodically climb up and down cover repeatedly. At one point on Horizon Miranda died three times in a row because she kept furiously running into Harbinger�s face. I appreciate the human shield tactics, honey, but you�re making me waste valuable medi-gel. 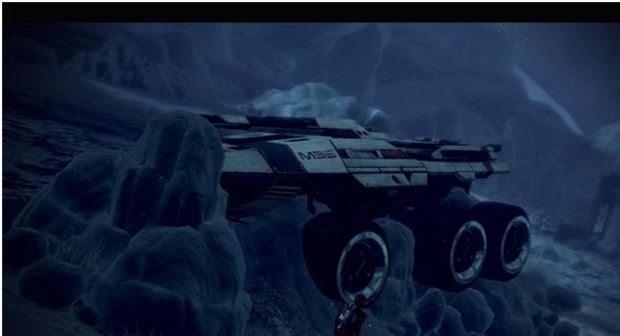 If nothing else, the Collectors deserve thanks for this.

So what would you like to see in Mass Effect 3? I used to quip about wanting an earlier release date but given the size and scope of Mass Effect as a series, BioWare has taken care of that one.
#Community    #Xbox360
Login to vote this up!