5:57 PM on 12.31.2010 (server time)    0
A few weeks ago, I shared with you a little keepsake from my idiotic community college years: a note I'd written to myself while totally trashed off Coors Light and Jagermeister.

As I mentioned, I'd found this pile of old notes and stuff amidst some doodles and correspondence, and thought it was funny enough to put on the internet in a place where prospective employers can frown at it.

Here's the front side: 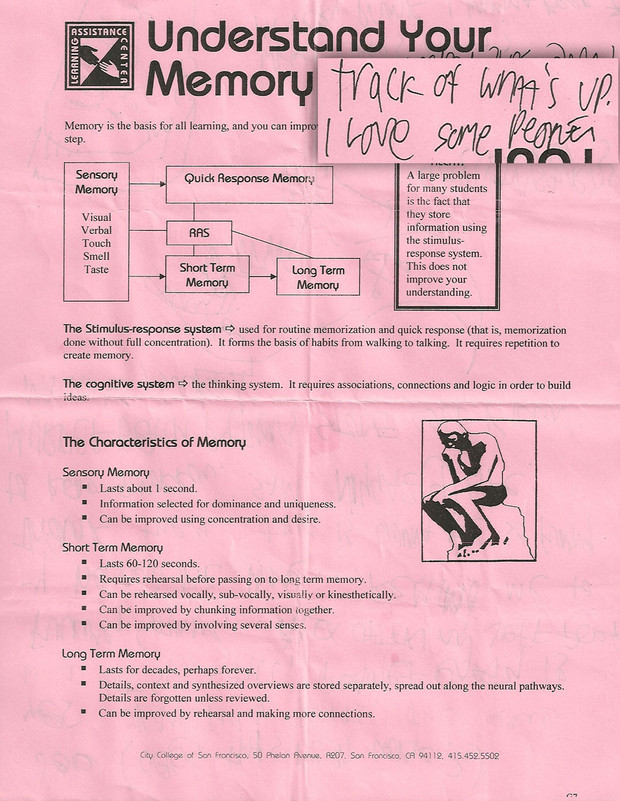 Translation:
Track of what's up.
I love some people.

This is probably from the same timeframe as the other note, spring 2007.

Around this time, my buddy Sam had just gotten a Geo Metro hatchback for about 600 dollars, and was extremely excited about driving such a hilariously shitty car. There was a CD player, but it was literally duct-taped into the dashboard, and the speakers were rolling around loose in the back. I'm a big guy, so I didn't fit in the car normally, but somehow, that night, Sam decided to give Alex and Jeff a ride home too. (Just to make this story more interesting, Jeff is a very handsome and athletic fellow, while Alex is a really hot girl who was probably like seventeen when all this took place.)

We piled into of Sam's Geo Metro with Alex and Jeff. Sam drove to my house, and Alex and Jeff decided to walk me inside, because I so illegibly mentioned: "Planet Earth is fucking spinning." Ah, to have the alcohol tolerance of a fifteen year old girl... Those were the days.

Also, this was back when I was in a GANG.

We were really the only gang in Sonoma, and we were called The Murder Beach Pythons. I'm not sure this was a very fitting name, since there are no murders, beaches, or pythons in Sonoma... But we all wore orange bandanas and hung out in the Safeway parking lot listening to Run-DMC really loud out of our car stereos.

I was one of the founding members, and my gang handle was "Mongoose." Some of the other names were "Wooly Bully," "Hands," "D-Pad," "Chief Thunderstorm," and "Brando Calrissian." I have the gang handbook somewhere, it's written in a Super Friends diary. Man, we were raw as hell.

Anyway. There's Gaynavysaurus, as you can see, and some ugly guy.

Then, on the other side of the paper is a worksheet about memory. Which is really funny, because I have no idea where that came from.

I'm sure this kind of ridiculous drivel isn't quite as interesting for you guys as it is for me, but what the hell. Free blogz. Hope everybody has a happy new year and writes themselves hilarious notes to read in the morning.
#Community    #NOTvideogamesrelated
Login to vote this up!