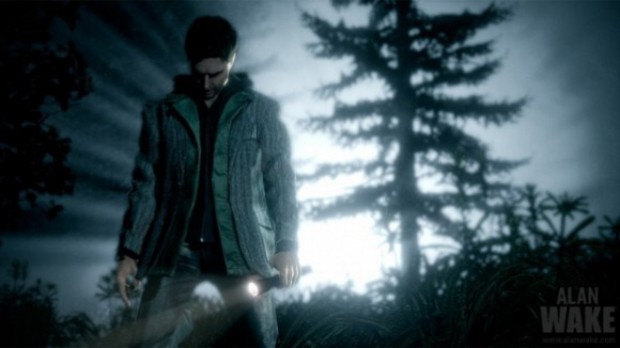 Later this week, I'll be preparing a video for my top 20 games of the year (that I played/finished/almost finished), but I wanted to start by talking about some of my favorite moments of gaming from 2010.

It was a super good year for gaming I felt, we saw the release of the oft-delayed, much hyped, Alan Wake which I fell in love with. Sure, sales weren't amazing for it, and most reviews seemed to paint the hype a little too dry but I couldn't help but adore the story. There was a lot of moments in this game that either scared me or made me think but there was one moment that i'll never seem to forget in the game. Spoilers ahead for anyone who hasn't played the game.

I was walking in an abandoned storage area it seemed, the radio was playing very faintly but enough that I could still hear it, the radio DJ was about to play a song but said a line (or an approximation of what's said) before which made the world seem more alive.

"And now, we're gonna play a song by a band called Poets of the Fall, they sound like our hometown band Old Gods of Asgard, so enjoy"

It may not seem like a poignant moment at first, but It was funny on a lot of levels. First, because Poets of the Fall contributed the song "War" for the soundtrack. Secondly, Old Gods of Asgard which are featured in one episode very prevalently, are Poets of the Fall doing more "classic metal" sounding songs for the fake band in the game.

Now the song plays very faintly over the radio, which was nice and soothing thinking "Oh there'll be no enemies, it's a breathing room area like wherever a typewriter was in Resident Evil"

Then the Taken came. Right when the song was about to rock the fuck out. Surrounded the entire storage area.

I was shooting the Taken while this song played very faintly in the background, like an action scene but with the most action-packed song sounding quiet and ambient. It made the world feel more alive to me through atmosphere, while also spooking me, thinking I was in a safe zone but completely changing the tables on me.

I could go on and on about Alan Wake (which could happen through this blog but not rapidly), but I just really liked that moment and originally went into the game without the hype really hitting me until the first playable demo at E3 2009. It was one of the best Xbox 360 exclusives to hit in 2010 and it'll be a game that will keep me thinking/talking for years to come.

Here's the song "War" by Poets of the Fall.

I'm Perry Jackson and i'm trying to break into video-game writing somehow. I figure i'll post stuff and I hope everybody likes it. I appreciate all your creative criticisms.

I can't really think of a top 5 games list, but it would include SMB3, FFVII, Viewtiful Joe, Marvel vs. Capcom 2 and Street Fighter IV (subject to change).

I hope you all think i'm cool enough to hang out with you!