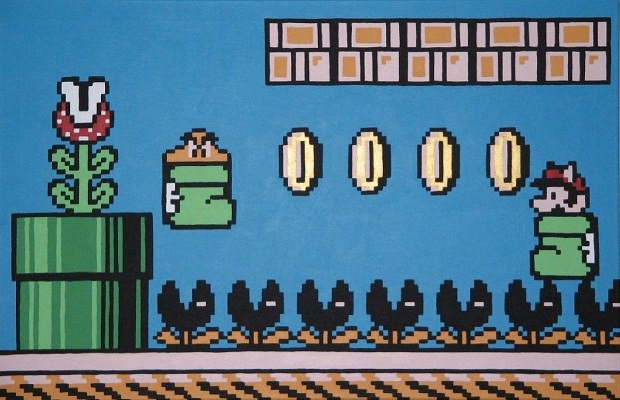 I haven't had time to write a proper article today as not only have I been preparing for Christmas, but it's also my birthday. Hoorah. I am today as old as the Super Mario Bros series. I came across the video below and it reminded me of one of the things I absolutely adore about classic games. Jump to the thirty second mark...


Did you see that? Seriously?! Super Mario Bros 3 is twenty-two years old, I've played through it countless times (even quite recently on Virtual Console) and had absolutely no idea you could do that. And it's clearly a proper feature Nintendo put in, not some random bug that can only be discovered by performing an illogical action. There are few things I find more thrilling that discovering some old favourite still has secrets to reveal. The coolest thing about this particular secret is that Nintendo have taken the Kuribo Shoe and Raccoon suit, two of the series' coolest ever items, combined them and made them both even more cool. Yes, it turns out the Kuribo Shoe was somehow even greater than anyone thought.

Another example would be the community that developed around investigating some of the original GoldenEye 007's little mysteries, like the island on the far side of the Dam, Ouroumov's briefcase in the Silo, the All-Bonds code or the elusive Citadel multiplayer map. Even though the truth was unsurprisingly mundane in the end - they were remnants of features Rare cut from the final game, which you can read more about here if you're interested - having those little unknown elements made every return trip to the game that little bit more exciting, as you never knew what new discovery was waiting for you.

I know it's easy to slip into a "life were better back in t'day" attitude, but I can't think of any modern games that have as many hidden treats as games like Super Mario Bros 3 or GoldenEye 007 that take years to be discovered. While hardly vital to making an engaging experience, such secrets do make games feel that little bit more personal. So in the season of goodwill and giving, what are the favourite little presents you've discovered in a game?

And since I'm not going to be around next week, I'll take this chance to wish my fellow Dtoiders a very merry Christmas, Hannukah or miscellaneous non-denominational seasonal holiday! See you in two weeks!
#Community
Login to vote this up!