QWOP-Teach me how to dud it. 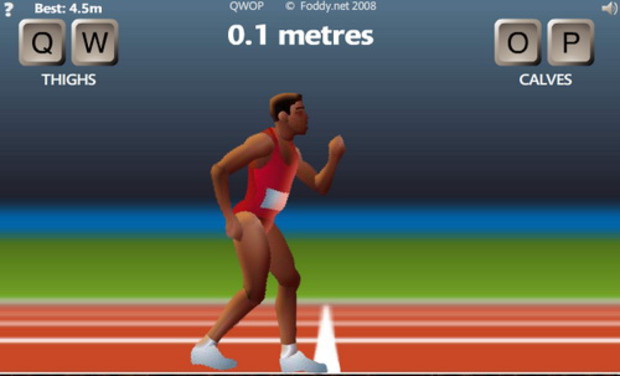 I was recently reading through the Weekend Destructainment. There are, as usual, a bunch of interesting videos to browse through. Now, there was one video in particular video about a running game. I watched and laughed as a possibly drunk person played what he call "the hardest game he had ever played".

The name of the game is QWOP.
I wasn't going to write a blog today, but then I played QWOP. And, I have to share my thoughts on it. It is a game where the goal is to make a dude run 100 meters. But, after watching the guy play it for a while I knew it wasn't going to be that easy.

It started off giving me the impression that there is nothing more than awful controls and watching a runner land, hilariously, on his face a few million times. That would be fine for a free flash game. But, just as that novelty started to ware off for me, I realized that I started making actual progress before slamming again.

See, this "running" game took the seemingly simple task of walking and made it "new" again.

The game isn't so much in the running itself, so much as it is learning how to walk. I felt, very much, like a toddler trying to figure his shit out. I was also reminded of how hard I sometimes, have to think about walking when I'm drunk. This game didn't hand me "out right intuitive" controls and then make me figure out the how rest of the game mechanics work. QWOP made it a game for me to just figure out the controls and that's it. It makes for an interesting experience.

It took me around a half hour before I hit my stride, but then I enjoyed the "simple" act of just running. It was short lived ,of course, as I soon lost my rhythm and slammed yet again. But, before that happened, I reveled in a feeling of immense progress and accomplishment.

The best part of the game is that, when I hit the sweet spot and started running, I was reminded of being a kid again on the brink of falling. See, I would run so fast that I would start to get scared. Then I would, in my state of mild panic, lose my rhythm. Then I would fall, bust my ass , roll on the ground and be in pain. Then, my classmate would laugh. Good times.