5:14 AM on 12.18.2010 (server time)    0
I've had a lot of work to do. I think this weekend I might have a career changing opportunity - sort of a make it or break it kind of thing - except with no gymnasts. Sorry I couldn't make it to FNF also. I think we will be playing Halo: Reach tomorrow (tonight) for the MS:Points. The next two chapters, in particular should be very exciting, but I did enjoy writing this one. Enjoy!

P.S. You guys really blew me away with your response to the Monthly Musing I just did. I'm going to have to do something really special for you guys in January. I already have something in mind.

Law and Reverend Anthony found the group walking back from Kraby�s lair. They needed a break. Everyone felt tense. Wolf introduced Law and Anthony to everyone. Anthony healed anyone with wounds or scars. Law turned back into his human form and shook everyone�s hands.

They made camp just outside of Bright Falls in a forested area. A campfire warmed them all up. James thought it strange to see Elsa huddled up near the fire with a blanket around her. She seemed less of a tomboy. Her sword lay there unmoving. The sword usually had so much spirit when she carried it. But, for the moment, she just relaxed. Just for now, she had stopped fighting and was just lost in her own thoughts.

�You don�t seem the married type Elsa.� James said, bringing her out of her trance.

�What? Why do you say that?� She said with a slightly uncharacteristic � easy going tone.

�You just seem like you�re always �in the wild�.� James said, hiding his surprise that she was actually having a conversation with him.

�Oh, I see. Then, why would I settle right.� Elsa deciphered his train of thought.

�Yeah. Well, I�m just kinda wondering. If you�re here, where is Mr. Elsa?� James grinned, staring at her as she continued to stare into the fire.

�Yeah,� She looked at him, trembling and trailing off. �He� passed away� awhile��

He saw that it was painful for her to respond gracefully. He offered a hand and put his arm around her. She smiled and she put her head on his shoulder. James never suspected that she had a sensitive side. Beyamor looked from beyond the fire. He and the others heard the conversation and hung their heads. They felt the pain she was feeling. James sat by her.

Her eyes swelled up, turned a bit bloodshot, and dripped silently. She had a habit of wiping them without actually touching the non-existent mascara. Her fingers dried on her jacket and went to her eyes, again, moving around make-up that wasn�t actually there. She took shallow breaths to hide how upset she was until those shallow breaths weren�t enough to get the oxygen she needed. She closed her eyes, put her hand on her chest, and cried.

�No, it�s okay. Thank you.� She sobbed. �I haven�t really let myself think about it for a long time.�

�We�re all here for you, okay?� James offered.

Kraid, Anthony, Law, Beyamor, Alice, and Wolf faced her and all nodded in agreement. She looked around at them and smiled over her sad eyes. She was able to calm down and feel safe around these new found friends. She hadn�t felt this camaraderie for a long time. She knew it couldn�t last, but was glad to have it for the moment. The fire and the still air calmed her under the moonlight.

�James, this is getting ridiculous.� Beyamor said. �Before too long everyone is going to be gone, us included. This isn�t going to stop. We need a plan. Please, anyone. Suggestions?�

�Maybe we should keep luck on our side and let James pick.� Hugh walked into the campsite.

�Hugh!� James said, looking behind him. Alphadeus raised his hand to wave it. �Alphadeus!�

Hugh and Alphadeus both took a seat near the fire with everyone else. After they looked around and introduced themselves to the new people, Beyamor spoke up again and continued the conversation.

�So, anyone? We need a plan.� Beyamor said. �And I don�t think we should just rely on a coin flip this time. Let�s think about what has happened.�

�Alright.� James said. �But you�ll have to excuse me while I try my coin flip anyway. I�m trying to figure out where my luck is leading me and why.�

James flipped the coin into the air and let it drop. It spun quickly and perfectly into the air giving the appearance of creating a translucent sphere. It came back down, still ringing and spinning. Upon hitting the ground it clinked against a rock. The rocks sent it spiraling into another pile of rocks. It sat tucked in between two rocks, standing on its own edge.

�Does that ever happen?� Alice said.

He snapped his thumb into the coin, lifting it off of his hand. This time he caught the coin in mid air. After that he slapped it onto the back of his other hand. It showed �heads� when he uncovered it. James knew �heads� meant he was supposed to go to Ravensdale.

�I have another suggestion.� Anthony said. �I know of another masked man in Silent Hill. I�m not saying it�s the same masked man that we�re looking for, but he does wear a mask. He calls himself The Comedian. He used to be a night watchman in Silent Hill but is now kind of a boogy man out there, terrorizing the citizens. Maybe that�s a good place to start.�

�Hmm�� James thought out loud. �My coin says to go to Ravensdale. What�s in Ravensdale?�

�Also, there are people there. We should protect that village before it�s too late.� Anthony pleaded.

�We could split up too.� Law said.

�I just don�t know about that.� James said. �You should never split the party.�

�Fuck it.� James said. �I�m just saying we should stay together. Besides, my luck has never done me wrong. I think I have to go to Ravensdale.�

�I want to go to Silent Hill.� Beyamor said. �It seems more tangible of a lead to me.�

�James,� Elsa said. �I�ll protect him. Me and Beyamor can go to Silent Hill.�

�I go where she goes.� Wolf stated.

�Okay, then this settles it.� James said. �Hugh, Alphadeus, Alice, Wolf, and Kraid � all of you are with me. Elsa� It�s you, Beyamor, Law, and Anthony. It�s a bit lopsided, but I�ll need all the help I can get in Ravensdale. Silent Hill is still a regular town, there isn�t as much violence there. And you guys can clearly handle The Comedian.�

�Oh yes,� Wolf said. �Before we head off to sleep, let me express something.�

�The masked man I fought. I know what his mask looks like.� Wolf said drawing the shape in the dirt. �And it looked very very similar to the mask Kraby had on his doll. The black and white paint on each side has been haunting me. I believe Kraby, was affected by the masked man�s aging power. It may have driven him mad. And in his sick twisted logic � he may have wanted to create a similar mask for his doll. Now, I�m not saying that the masked man will wear the same masks, or wear one at all when we find him. But, all the same, watch for that shape. He might be carrying the same mask to this day. Good luck to you all.� 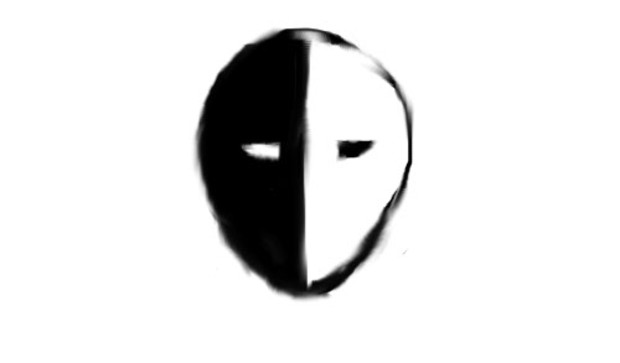