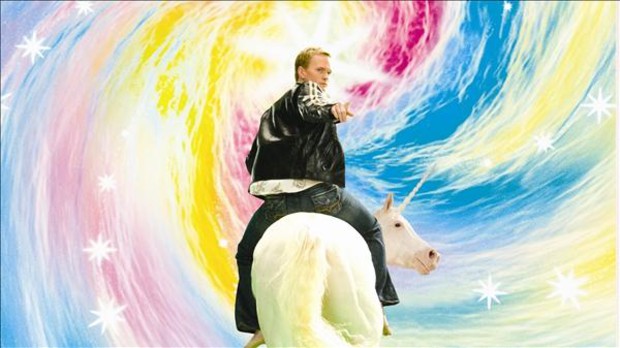 
I got word today that Spike is partnering with a few videogame devs to release a "demo disk" ,of sorts, to coincide with next year's well respected Spike Video Game Awards.

I got a statement from the spokesperson of this project, Neil Patrick Harris.

"In an effort to improve on the complete success of this year's VGA's. We are going to release a video game version of next years show. It will basically be a stylized compilation of next year's winners, complete with avatar support. However, they won't be standard demos, as they will showcase the very best parts of each winner with no real sense of context and it will be presented in an award show-esque fashion. Also, Diddy will be featured in the game telling lighthearted jokes at the gamer's expense." Awesome...

"The retail disk will be released the same day that next year's TV program will be aired. I've been asked how we know who the winners will be in time to meet the game's release date. See, the winners have already been picked. We will be allowing our Spike audience to vote for their favorites, but they will most likely pick the same games that have already been chosen. For example, the Award for Best Earthling Automobile Racing Simulator is going to Need For Speed: Hot Pursuit. But, that's a surprise."

Mr. Harris, also mentioned, "Olivia Munn, has forced me to let her host the VGA's as well as the digital VGA's for 2011." He then implied that we might get to see her breast at some point in the game. I knew this because he made inappropriate gestures and a face that made me somewhat uncomfortable.

When asked about pricing, NPH responded,

"Oh, we will be charging full price for this bitch."

My response to this year's VGA's is best summed up as "Meh. It was better than last year's, I guess." It looks like I'll be getting deja vu in about a year.


[Disclaimer- This story is completely fictitious. There is no such game, nor did anybody make such an announcement. Details about next year's winner's and host are falsified. No boobs for you!]
#Community    #Rants
Login to vote this up!