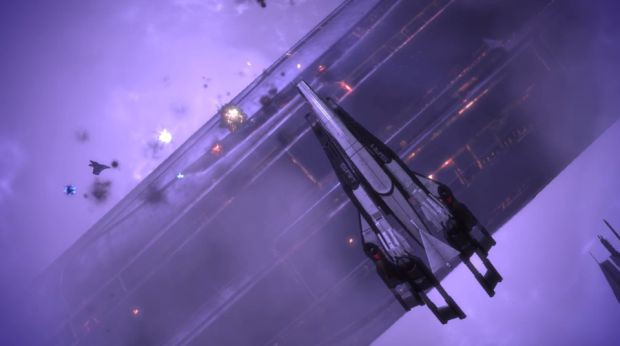 I feel like these two games reflect the most common ways that blending player freedom and concrete story, but they don't quite live up to this standard I have in my head. One provides the player with a lot of options, but can create dissonance within the story, the other feels like a choose your own adventure book with only one right option. So is it even possible? In some ways no. A linear story requires some sort of authorial control, and emergent gameplay puts authorship in the players hands. I do think any practical combination will require some flipping between the two, but I think it's the placement of narrative that can achieve this. For example, placing the linear narrative as end caps and leaving the middle a gooey center of player driven action holds a lot of promise. Essentially what I'm asking for is the three-act play to be adapted to gameplay mechanics.

Act one in any good story fulfils the role of exposition. In it, a story should introduce the characters, the overall goal of the hero, and in a game, explain the rules. Many video games with a story follows this. Act two is the time where the protagonist is faced with opposition to achieving the goal, and it's here that I'd love to see authorship change hands. This middle section often features a variety of roadblocks, side stories, and development of the character, and why not simply have those fabricated by the mechanics of the game. Allow the player to become exuberantly wealthy in this time instead of having a bunch of scripted events increase their funds, encourage them to go recruit followers from the towns of their choosing in place of giving them an army of npcs because of some plot device, or let the player fall because of his or her own ineptitude rather than overwhelming the player through a linear sequence, let the player right this portion of the story. However, opening this act creates a lot of problems for Act three. As I see it, either many endings are required, or the ending has to be broad enough in scope that all roads lead too it. I can only imagine the former requires ample amounts of time, money, and work, and the later requiring something simple, such as the killing of a character.

Writing this, I feel like its a very simple approach, and so it surprises me greatly that I can't think of anything that has tried it on a large scale. One game that I've always wanted to see attempt this (the one that inspired a lot of these thoughts) is Mount & Blade. Mount & Blade throws the player in a world and allows them to amass an army, siege castles, meet defined characters who react depending on how they've been treated, and be captured and lose it all. However, Mount & Blade requires the player to define their own goals, and I thought it would be incredibly beneficial to provide the player some guidance through a story structured in the manner described. But I believe the lack of such narrative is simply based on what the intention of the developers is. They are wanting to create a world where stories are completely fabricated by the player. And the reason Mass Effect 2 doesn't feature the maelstrom of player choice I'm after is because they are looking to communicate a very specific emotion too their players. And so. I wait until a developer comes along that desires to turn their mechanics into a three act play.
#Community    #Rants
Login to vote this up!