Poker Night at the Inventory Quick Review + Where Have I Been? 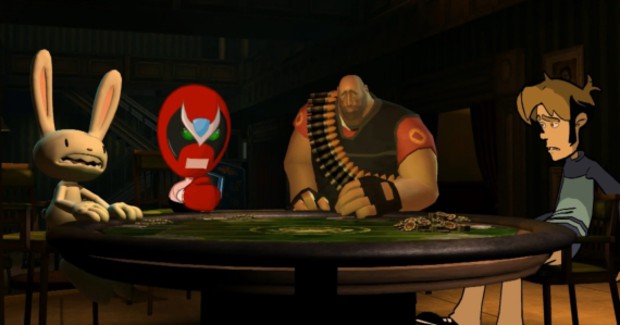 Who needs a multiplayer mode when you've got these guys?

Other than that there really isn�t much to say. The dialogue is fantastic, but you already knew that because it�s a Telltale game featuring Tycho. Seriously though, this game had me literally laughing out loud on many occasions. If you simply hate poker and can�t even play it with friends, then you probably won�t like this game. If you�re not crazy about poker but you�ve played it with friends (like me), this game is a good way to relive some of those wild nights. If you are crazy about poker you�ve probably already bought this game. Overall, I give Poker Night at the Inventory a 9 out of 10.

For reading this far, you have won a free bonus paragraph! Click here to verify that you're over 18 and eligible for this prize by sending me all of your money.

Seriously though, some of you may be wondering where I�ve been these past few months. And the answer is simple; this semester was crazy for me. I took Game Development 1 at school and it was an insane amount of work. In groups of 5-6 we built four games in total (new groups for each game), we had two weeks to work on the first three games, and four weeks to work on the last game. It was a lot of work but a lot of fun too, it did however severely limit my Destructoid time. However, I plan on making a comeback in a big way, starting with this here review of my new favorite poker game, and continuing with the set-up blog I promised way back in the summer. Yep, I promise to finally get off my ass and take pictures of the sweet set-up I�ve been rocking the past half a year or so. Be on the lookout for that sometime soon. Also, I�m going to look at getting two of the games I created this semester up on here as well, one of them, Zenshiro: Astro Samurai is a 2D space shooter and the other, Orphan, is a 3D action game with To Live is to Die by Metallica as its soundtrack. I can�t promise delivery on either of these games as I�m not sure I�ll be able to get an executable for them but I will do my best.
#Community
Login to vote this up!