Die2Nite: A Free Game You Should Check Out 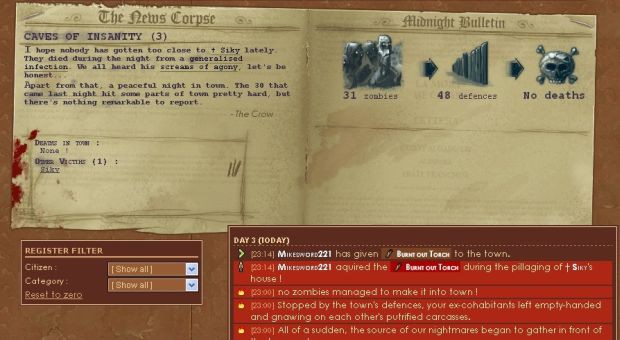 This means you all worked well together.

As I said earlier, each day will bring more and more zombies into the realm. Between twenty and thirty seems to be the norm for the first day, but such innocuous numbers don't last long. The increase is there to keep players working together and maintain challenge. Now every game features challenge, but the sometimes rapid increase can fabricate some fervent moments in the game. A good example of this happened to me early on. We had gotten to day four and over the last three days, attacks had grown by around thirty each day. We expected the same, so focused on more domestic issues. However, two hours before the attack, we realized that tonight�s hoard was three times larger than we expected. The majority of us had done other tasks during the day and were incapable of preparing for the attack. Still, for the next couple hours the forums were ablaze as we tried to figure out a way for even a few of us to survive. The group was frantic, and to see us all rattling our brains for a solution was great. Normally I expect such emotions to only occur in an intense shooter or maybe a close game of Starcraft, but there it was, flourishing in plain old text. Of course nothing came, and in the morning, we all received the achievement �Grandma, what big teeth you have.�

I've been playing for a while and so far have really enjoyed myself. The only major complaint I can raise against the game is the reincarnation system. Every time you die, you reincarnate into a random town. The lack of penalty that the system provides to get back into the action is nice, but it means that you are forced to set up some sort of coherence among everyone all over again, you have to repost a new player guide, and learn who you can trust out of these mysterious strangers. Sure, the more you play the easier it is to know what to do, but with it, it becomes far more common to distance yourself from the group, only communicating pivotal information. Long gone will be your �What are you listening too?� thread and your inside jokes, instead replaced by the refined cold thinking of experience...

But hey, don't let that dissuade you, give Die2Nite a chance.
#Community    #PC
Login to vote this up!