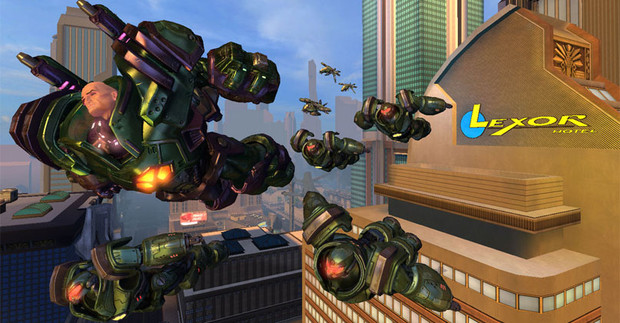 While progressing, you gain access to various dungeons in the DC Universe (not to be confused with end-of-mission instances). These are the same (as are the quests within) for heroes and villains. One feature that I quite liked was that these dungeons don�t actually exist within the game world. If you want to go to the Smallville instance towards the end of the game, for example, you don�t have to spend fifteen minutes flying there. You simply go to your PVP/Instance menu, activate the queue for that instance and wait till you get in. The game, currently, is balanced so that most dungeons (of the 6 or so currently available in �Classic� DCUO) are easily finished with a full party of four (sometimes even just 3). The layout of dungeons mimics the quests you�ll do in the overworld. They are usually large, open-air environments where you go from one zone to the next (as directed by either Martian Manhunter or Talia Al-Ghul over your communicator) and kill X number of enemies, activate Y number of �crates/barrels/panels�, go to a new area and rinse and repeat, and then finally head to the final boss encounter. I�ll go ahead and say that I found most of the final boss encounters in these dungeons to be a bit disappointing story-wise (with one exception that I won�t spoil). They mostly feature more obscure villains while your average quests will pit you against much more recognizable characters. In terms of gameplay, the bosses were usually slightly challenging and rarely frustrating. Your average dungeon takes about 30-45 minutes to get through depending on team size and level. Dungeons also supposedly feature Hard modes that should up the challenge.

After the level 30 cap, you unlock �the endgame�. The endgame currently consists of an impressive number of full-on raids that usually require a dozen heroes/villains to get through and the unlocking of Duo mode. I�ve only done a few of the raids but they seem to function (unsurprisingly) as larger, harder dungeons. The loot drops seem to be arbitrarily awarded to a few players, but they�re often not much better than what you have anyway so it�s not a big deal if you miss out on a few. The raids do seem to feature slightly more impressive story content than your average dungeon but as I haven�t played them all yet, I can�t really say for sure. A low Beta population tends to create painful wait times for these things. Duo mode, for those still paying attention, is basically a high level version of all of the instance portions of the quests you already did. Remember when you went toe to toe with Poison Ivy, well now you can do it again with a friend�but it�s harder!

Next, there�s the PVP mode that unlocks (I think) when you hit level 7. As you increase in level, you get access to new arenas to battle your foes in. There are two types of PVP Arena: Legendary and Not Legendary (or just, Arena, as it�s called). Legendary Arena�s let you play as iconic heroes and villains complete with their power sets. Normal Arenas let you play as�you. Both offer the fairly similar experience of smashing enemies while trying to capture items or stand on contested hot zones. It�s fun but not especially compelling.

So what is the point of all of this endgame stuff if you can�t do it till you�ve stopped earning XP anyway? Well, each Mentor type (Metahuman, Tech, and Magic) can eventually purchase pieces of super-mega-ultra iconic armor unique to their �type� with tokens that they earn by doing all of this endgame stuff. They take a long time to earn and the game hasn�t really made it clear which activities reward you with which type of token (because, of course, there�s different types). However, the huge increase in stats (and the cool look) will make the investment worth it for any player that�s interested in serious PVP. A final note about PVP, I chose to play on a PVE server because I didn�t want to worry about dying randomly while I was questing, but I�m sure the PVP server offers the usual experience of getting ambushed by high level players with nothing better to do. However, like WoW, even PVE servers will flag you as PVP active when you come back from a PVP arena, so be careful.

DC Universe Online is fun. It�s also very short. There�s still a lot of balancing to be worked out, but the basic framework is there for a fairly compelling MMO. As I said before, its strength is definitely in its combat. Currently, its weakness is its length. I find it seriously hard to believe that anyone will want to subscribe to this game for more than a month at a time. Unless they constantly keep a fresh stream of content rolling out, most players will run into a brick wall upon hitting the level cap (which won�t take long). There�s definitely stuff to do at the endgame (replay old dungeons on Duo Mode, do raids, PVP, etc) but the solo experience (that defines levels 1-30) is over and the story (for now) is done. There�s some mild incentive to replay as different power/morality types, but the experience will be largely the same. The stage is definitely set for expansions as you (unsurprisingly) don�t resolve the central conflict by the end of your last mission; I question the development team�s wisdom, however, in allowing such fast progression. Apparently it�s by design (they wanted to eliminate that sense of �the grind�), but I can only see players getting frustrated with the lack of content and cancelling their subscriptions after the first month or so (maybe to renew when the next big patch or expansion rolls around). There was actually a lengthy thread on the Closed Beta forums about this same issue but a moderator shut it down. He cited collecting Investigation tokens as a sufficiently fun way to enjoy solo content at the end game�

Unofficial Closed Beta Preview Score: 7.0 (7s are solid games that definitely have an audience. Might lack replay value, could be too short or there are some hard-to-ignore faults, but the experience is fun)

If you have any specific questions that weren�t addressed in this overly long write-up, feel free to ask. I fully leveled a Hero and Villain (Mentored by Superman and Lex Luthor, respectively) and know most of what there is to know about the Mental/Nature Power types and the Hand-Blaster (I love typing that) and Two-Handed Weapons.
#Community    #reviews
Login to vote this up!