FFXIV: Should have been set in Ivalice

In the event that this highly unlikely occasion was to randomly occur, I believe the first image or word to pop into peoples minds would be World of Warcraft. What does this mean? Well, it tells us that its a darn popular game that's what. But we here at Destructoid are gamers, of course we all know that. However, different sects of people have varying opinion regarding how WoW built its own thrown and sat on it with no one to suggest otherwise. Some say "because its teh best game on the interwebs, evar" others state "It was just luck. Came out at the right time with no other game to compete with it" The more educated fellow might say; "The lead designers of WoW, where long time players of Everquest. Its a classic case of: taking somethings formula and doing it better" In the shadow of all these opinions, I rarely hear the one that goes "Its because we became enthralled with the world that we played in Warcraft I, II and III, so its awesome to be able to traverse that world we spent all those years clicking on"

That is the core reason why I believe WoW is so popular.

Fast forward the clock to the present day, and we have Square-Enix giving us the damaged goods with FFXIV. We have all played the game and if not, then you have probably seen the reviews and know how bad it was. (Its gotten a lot better since the November update, but I still have a somewhat bitter sensation up my butt from being raped) In my butt. Speaking of butts, lets get to the bottom of things. Apart from being the master of Segues, I have a passionate opinion regarding FFXIV. I honestly feel that SE should have used the brains located somewhere inside them and set the game in Ivalice. Which, in case you are not a nerd like me, is the world that Final Fantasy Tactics, XII and Vagrant Story is set in. To branch off from what was mentioned a minute ago, there are many high points for basing a new game in a world that the players have been involved with before. Familiarity being a key aspect and viewpoint being another. The ability to explore a place that we have been in before, with a different character, in a different genre with a different feeling, is an awesome thing. For the small amount of time that I played WoW for, I loved running around as a Night Elf Hunter because it felt like I was one of those units that I had been poking on the head back in Warcraft III. It was me, who was exploring that world and living out its lore, instead of commanding a mass of guys and marching them to their imminent deaths because I was not very good at the game. 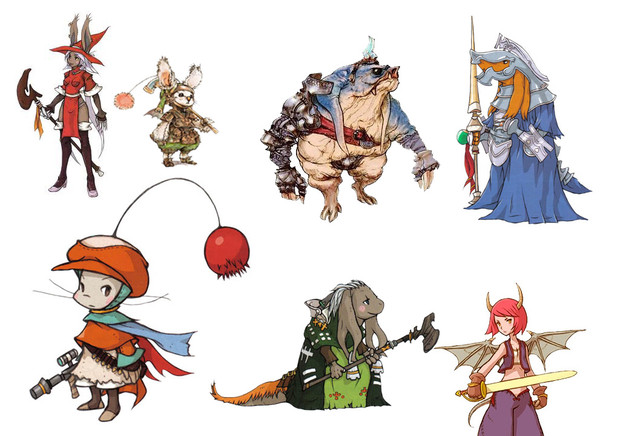 If the idea of Eorzea was tossed out the window and we had Rabanastre as one of the starting nations that players could choose - that ALONE gives room for so many plot devices that could of been pulled from FFXII. Maybe if Ivalice was on their minds, It might of been an easier game to develop? I mean, to have 3 games (with 1 of them its own mini series) and use them as source material for a new game, the only way that game would take extra long to make is if the developers are "monkeys flicking peanuts on a wall and trying to catch it" - Jim Sterling.
Ironically, maybe if they went down this road we, they wouldn't of released an unfinished game in October to get the jump on WoW: Cataclysm. (Yes SE, I see through your guise!) I understand their motive for releasing a game very similar to the one that their fans have been playing for over 7 years already, but they also clearly want people to still play FFXI, so why make a shiny clone of it? They may aswell have taken that risk and made something either completely new or played out the actions that this article is asking. Either way, the XI players would have gone back to that game if they didn't like XIV so it could of been a win/win scenario.

Leave your thoughts, tell me what you think. How do you feel FFXIV would of worked if it was set in Ivalice?

If anyone is in the process of building a time machine, please get in touch with me so I can go back about 3000 hours and show SE this post. My heart still wants to go to character creation, make a sexy Viera, slice Vaan in half with a hammer and accept quests from Balthier.
#Community    #Rants
Login to vote this up!